The Bitcoin Standard by Saifedean Ammous 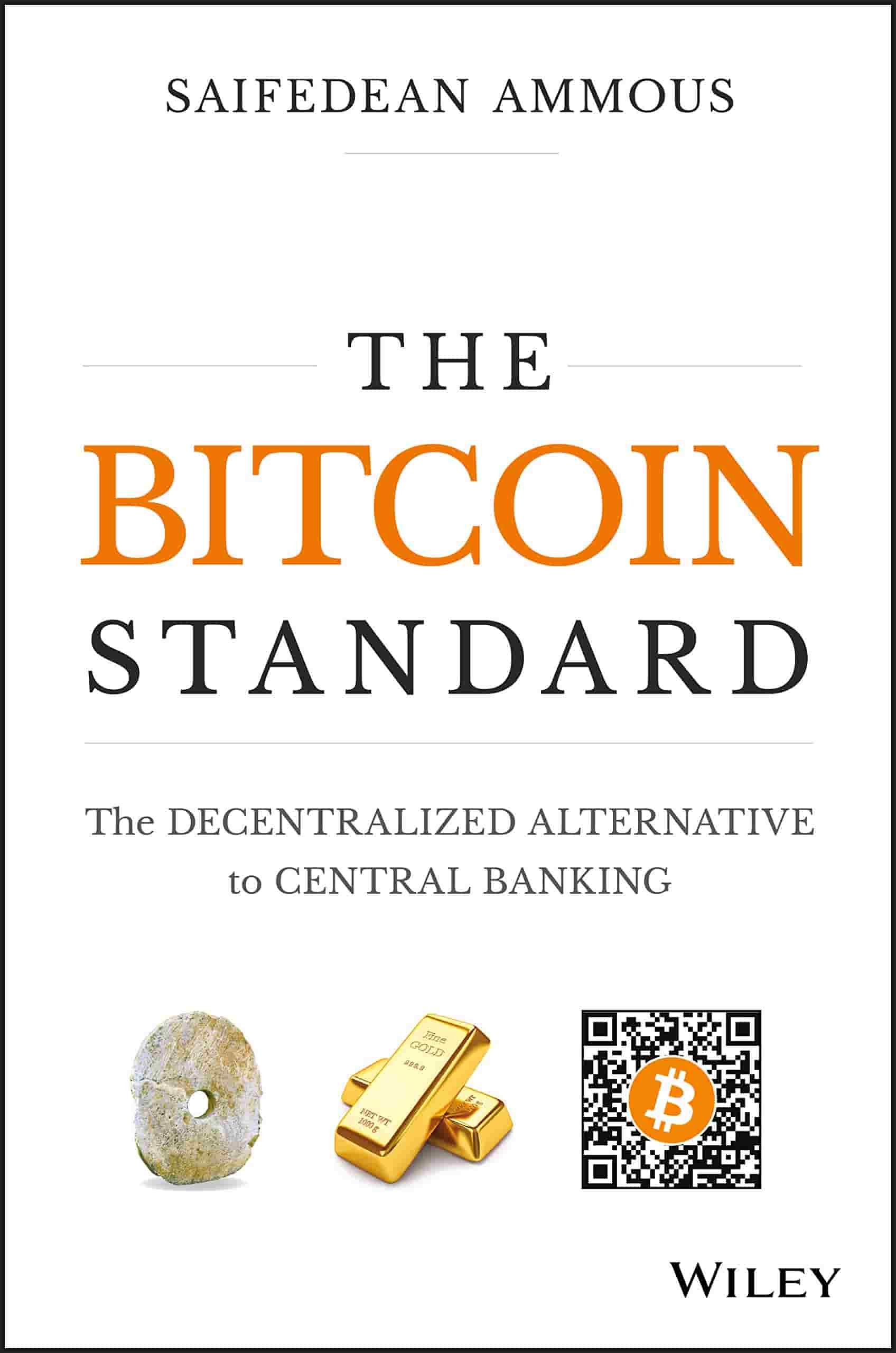 Bitcoin is a digital good that has been programmed to be finite, meaning you can’t make more of it. By being the first digital object that is verifiably scarce, Bitcoin is the first example of digital cash.

Scarcity is the fundamental starting point of all economics: seashells were used as money when they were hard to find, loose cigarettes are used as money in prisons because they are hard to procure or produce.

‍The value of goods to be used as money depends on how much more of it can be added in the future. Gold for example is valuable because it is scarce (there isn’t much available on Earth, as far as we know) and it’s durable over time (impossible to destroy / create from scratch). You can dig to find more gold, but it’s not an easy process.

Government paper money on the other hand, can be printed in abundance. When that happens, the value of our money value decreases fast, eroding our savings, purchasing power etc. In Venezuela, once the currency lost its value, people started using it to make bags, paintings and all sorts of other souvenirs with it.

Bitcoin can also be easily exchanged in small or large quantities, and by being digital, it’s incredibly easy to send and receive it from around the world. However, the network probably won’t be able to handle all payments globally. Most likely, a bitcoin-based digital token will be created, with most payments happening off-chain. Bitcoin will become the new emerging reserve currency for online transactions.

⇾ Bitcoin can be best understood as distributed software that allows for transfer of value using a currency protected from unexpected inflation without relying on trusted third parties. By being the first digital object that is verifiably scarce, Bitcoin is the first example of digital cash.

⇾ Your first investment should not be in buying bitcoins, but in time spent understanding how to buy, store, and own bitcoins securely. It is the inherent nature of Bitcoin that such knowledge cannot be delegated or outsourced.

⇾ Bitcoin is the newest technology to serve the function of money—an invention leveraging the technological possibilities of the digital age to solve a problem that has persisted for all of humanity's existence: how to move economic value across time and space.

⇾ Being a medium of exchange is the quintessential function that defines money—in other words, it is a good purchased not to be consumed, nor to be employed in the production of other goods, but primarily for the sake of being exchanged for other goods.

⇾ Salability—the ease with which a good can be sold on the market whenever its holder desires, with the least loss in its price. The relative salability of goods can be assessed in terms of their salability across scales, across space, and across time. A good that is salable across scales can be conveniently divided into smaller units or grouped into larger units, thus allowing the holder to sell it in whichever quantity he desires. Salability across space indicates an ease of transporting the good or carrying it along as a person travels. It is the third element, salability across time, which is the most crucial. A good's salability across time refers to its ability to hold value into the future, allowing the holder to store wealth in it, which is the second function of money: store of value. For a good to be salable across time it has to be immune to rot, corrosion, and other types of deterioration. But physical integrity through time is a necessary but insufficient condition for salability across time, as it is possible for a good to lose its value significantly even if its physical condition remains unchanged. For the good to maintain its value, it is also necessary that the supply of the good not increase too drastically during the period during which the holder owns it.

⇾ The more people accept a monetary medium, the more liquid it is. The gains from joining a network grow exponentially the larger the size of the network.

⇾ A slow drain of [a good’s] monetary value over time will slowly transfer the wealth of its holders to those who can produce the medium at a low cost.

⇾ Easy money does not make a society richer. Unsound money all too frequently coincided with civilizational decline and societal collapse.

⇾ Gold is so chemically stable that it is virtually impossible to destroy, and second, gold is impossible to synthesize from other materials and can only be extracted from its unrefined ore, which is extremely rare in our planet. Over the past seven decades with relatively reliable statistics, this growth rate has always been around 1.5%, never exceeding 2%.

⇾ For China, which stayed on the silver standard until 1935, its silver (in various names and forms) lost 78% of its value over the period. It is the author's opinion that the history of China and India, and their failure to catch up to the West during the twentieth century, is inextricably linked to this massive destruction of wealth and capital brought about by the demonetization of the monetary metal these countries utilized. History shows it is not possible to insulate yourself from the consequences of others holding money that is harder than yours.

⇾ No pure fiat currency exists in circulation without any form of backing. It is only by holding gold that governments could get their money to be accepted at all.

⇾ Government money is liable to having its supply increased quickly compared to its stock, leading to a quick loss of salability, destruction of purchasing power, and impoverishment of its holders. Growth at 5% per year may not sound like much, but it will double the money supply of a country in only 15 years.

⇾ Gold inflates at around 2% a year. Bitcoin not only doesn’t inflate, but the software gets better with time. It becomes harder and harder.

⇾ Creating new pieces of paper and digital entries to paper over the deficiency in savings does not magically increase society's physical capital stock; it only devalues the existing money supply and distorts prices. It can work for a while, but reality cannot be deceived forever.

⇾ Hard money would force everyone to be productive to society instead of seeking to get rich through the fool's errand of monetary manipulation. [In many industries] The criteria for success in the market becomes more and more related to being able to secure funding at lower interest rates than to providing services to society.

⇾ The fundamental scam of modernity is the idea that government needs to manage the money supply.

⇾ Bitcoin has operated with practically no failure for the past 9 years, and if it continues to operate like this for the next 90, it will be a compelling solution to the problem of money, offering individuals sovereignty over money that is resistant to unexpected inflation while also being highly salable across space, scale, and time.

⇾ Bitcoin is the hardest money ever invented: growth in its value cannot possibly increase its supply; it can only make the network more secure and immune to attack.

⇾ Collectively, what prevents a majority from colluding to be dishonest is that if they were to succeed in compromising the integrity of the ledger of transactions, the entire value proposition of Bitcoin would be destroyed and the bitcoin tokens' value would collapse to nothing.

⇾ The only way to shut it down is to kill every server that hosts it. Which is hard, because a lot of servers host it, in a lot of countries, and a lot of people want to use it. But as long as there are people who want to use it, it's very hard to kill, or corrupt, or stop, or interrupt.

⇾ For the bitcoin price to rise, people must hold it as a store of value, and not just spend it.

⇾ When peasants' productivity and survival was tied to the land that they did not own, the threat of violence was effective in getting them to be productive to benefit the landowner. Similarly, industrial society's heavy reliance on physical productive capital and its tangible output made expropriation by the state relatively straightforward. But as the individual's mental capacities become the prime productive force of society, the threat of violence becomes far less effective. Humans can easily move to jurisdictions where they are not threatened, or can be productive on computers without governments being able to even know what they are producing.

⇾ Bitcoin provides a cost‐effective option for people needing to get around government restrictions on the banking sector, as well as to save wealth in a liquid store of value not subject to government inflation.

⇾ Bitcoin can be seen as the new emerging reserve currency for online transactions, where the online equivalent of banks will issue Bitcoin‐backed tokens to users while keeping their hoard of Bitcoins in cold storage, with each individual being able to audit in real time the holdings of the intermediary, and with online verification and reputation systems able to verify that no inflation is taking place. This would allow an infinite number of transactions to be carried out online without having to pay the high transaction fees for on‐chain transactions.

⇾ Bitcoin is still viewed as a quirky Internet experiment for now, but as it continues to survive and appreciate over time, it will start attracting real attention from high‐net‐worth individuals, institutional investors, and then, possibly, central banks.

⇾ The first central bank to buy bitcoin will alert the rest of the central banks to the possibility and make many of them rush toward it.

⇾ The real advantage of Bitcoin lies in it being a reliable long‐term store of value, and a sovereign form of money that allows individuals to conduct permissionless transactions. Bitcoin's main uses in the foreseeable future will follow from these competitive advantages, and not from its ability to offer ubiquitous or cheap transactions.

⇾ Bitcoin is an embodiment of Nassim Taleb's idea of antifragility.

⇾ Another important reason why banking as an institution is not going away is the convenience of banking custody. While many Bitcoin purists value the freedom accorded to them by being able to hold their own money and not rely on a financial institution to access it, the vast majority of people would not want this freedom and prefer to not have their money under their responsibility for fear of theft or abduction. Deposit banking is a legitimate business which people have demanded for hundreds of years around the world.

⇾ Bitcoin is the only truly decentralized digital currency which has grown spontaneously as a finely balanced equilibrium between miners, coders, and users, none of whom can control it.

⇾ “Let’s do it on the blockchain”. No. The only advantage that [Blockchain technology] offers is eliminating the need to trust in third‐party intermediation.