How to Avoid a Climate Disaster by Bill Gates 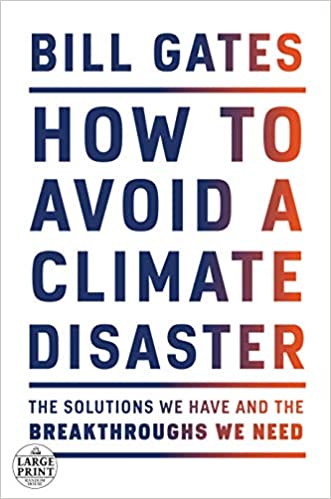 Fifty-one billion is how many tons of greenhouse gases the world typically adds to the atmosphere every year. Zero is what we need to aim for. Setting a goal to only reduce our emissions—but not eliminate them—won’t do it. The only sensible goal is zero.

Climate warming will create lots of trouble: more frequent and violent storms, droughts, sea level rising, diseases migration, wildfires, decreased food supply, health issues, etc. By mid-century, climate change could be just as deadly as COVID-19, and by 2100 it could be five times as deadly.

To get to zero will be extremely hard. The path to zero emissions will require a massive amount of innovation. We need to make clean energy just as cheap and reliable as what we get from fossil fuels. Direct public investment in research and development is one of the most important things we can do to fight climate change, but governments aren’t doing nearly enough of it.

As a citizen, engaging in the political process is the most important single step that people from every walk of life can take to help avoid a climate disaster. Pressure politicians to make the tough choices and trade-offs necessary to deliver on their promises to reduce emissions.

There are two numbers you need to know about climate change. The first is 51 billion. The other is zero. Fifty-one billion is how many tons of greenhouse gases the world typically adds to the atmosphere every year. Zero is what we need to aim for.

The climate is like a bathtub that’s slowly filling up with water. Even if we slow the flow of water to a trickle, the tub will eventually fill up and water will come spilling out onto the floor. Setting a goal to only reduce our emissions—but not eliminate them—won’t do it. The only sensible goal is zero.

The key to addressing climate change is to make clean energy just as cheap and reliable as what we get from fossil fuels.

There are no realistic paths to zero that involve abandoning these fuels completely or stopping all the other activities that also produce greenhouse gases (like making cement, using fertilizer, or letting methane leak out of natural gas power plants). Instead, in all likelihood, in a zero-carbon future we will still be producing some emissions, but we’ll have ways to remove the carbon they emit. In other words, “getting to zero” doesn’t actually mean “zero.” It means “near net zero.”

Not everyone will suffer equally from hotter and more humid days. And some places might actually benefit from a warmer climate. But the overall trend points toward trouble from a hotter climate.

But what does trouble mean? Violent storms. Hurricanes and floods destroy human lives, buildings, roads, and power lines that took years to build. Drought. Some places are experiencing more frequent and more severe droughts. This can have serious consequences: some linked Syrian civil war to droughts made worse by climate change. Wildfires. Rising sea levels. Decreased food sources. Spread of diseases (As it gets hotter, for example, mosquitoes will start living in new places (they like it humid, and they’ll move from areas that dry out to ones that become more humid), so we’ll see cases of malaria and other insect-borne diseases where they’ve never appeared before. Health issues (e.g. strokes).

By mid-century, climate change could be just as deadly as COVID-19, and by 2100 it could be five times as deadly.

[Solving climate change] will be extremely difficult. Almost everywhere, people are living longer and healthier lives. Standards of living are going up. There is rising demand for cars, roads, buildings, refrigerators, computers, and air conditioners and the energy to power them all.

The speed of urban growth is mind-boggling: By 2060, the world’s building stock—a measure that factors in the number of buildings and their size—will double. That’s like putting up another New York City every month for 40 years, and it’s mainly because of growth in developing countries like China, India, and Nigeria. We need to make it possible for low-income people to climb the ladder without making climate change worse.

Problem: Fossil fuels are everywhere. They’re so pervasive that it can be hard to grasp all the ways in which they—and other sources of greenhouse gases—touch our lives.

There’s a very good reason why fossil fuels are everywhere: They’re so inexpensive. As in, oil is cheaper than a soft drink.

How can we make Carbon-Free Electricity?

Nuclear fission. Here’s the one-sentence case for nuclear power: It’s the only carbon-free energy source that can reliably deliver power day and night, through every season, almost anywhere on earth, that has been proven to work on a large scale. No other clean energy source even comes close to what nuclear already provides today.

Nuclear plants are also number one when it comes to efficiently using materials like cement, steel, and glass. You’re getting far more energy for each pound of material that goes into building and running the power plant.

Nuclear fusion. There’s another, entirely different approach to nuclear power that’s quite promising but still at least a decade away from supplying electricity to consumers. Instead of getting energy by splitting atoms apart, as fission does, it involves pushing them together, or fusing them. Although it’s still in the experimental phase, fusion holds a lot of promise.

Other options are offshore wind and geothermal.

Direct public investment in research and development is one of the most important things we can do to fight climate change, but governments aren’t doing nearly enough of it. Here is a list of all the technologies needed:

As a citizen, when you ask yourself what you can do to limit climate change, it’s natural to think of things like driving an electric car or eating less meat. This sort of personal action is important for the signals it sends to the marketplace, but the bulk of or emissions comes from the larger systems in which we live our daily lives. When somebody wants toast for breakfast, we need to make sure there’s a system in place that can deliver the bread, the toaster, and the electricity to run the toaster without adding greenhouse gases to the atmosphere. We aren’t going to solve the climate problem by telling people not to eat toast. But putting this new energy system in place requires concerted political action. That’s why engaging in the political process is the most important single step that people from every walk of life can take to help avoid a climate disaster.

Policy makers can take on only so many problems at once. And they decide what to do, what to prioritize, based on what they’re hearing from their constituents. In other words, elected officials will adopt specific plans for climate change if their voters demand it. Thanks to activists around the world, we don’t need to generate demand: Millions of people are already calling for action. What we do need to do, though, is to translate these calls for action into pressure that encourages politicians to make the tough choices and trade-offs necessary to deliver on their promises to reduce emissions.

As a consumer, reducing your carbon emission isn’t the most powerful thing you can do. You can also send signals to the market that people want zero-carbon alternatives and are willing to pay for them. When you pay more for an electric car, a heat pump, or a plant-based burger you’re saying, “There’s a market for this stuff. We’ll buy it.”

You can also reduce your home’s emissions. Depending on how much money and time you can spare, you can replace your incandescent light bulbs with LEDs, install a smart thermostat, insulate your windows, buy efficient appliances, or replace your heating and cooling with a heat pump. Buy an electric vehicle. Try a plant-based burger.

I’m an optimist because I know what technology can accomplish and because I know what people can accomplish. I’m profoundly inspired by all the passion I see, especially among young people, for solving this problem. If we keep our eye on the big goal - getting to zero - and we make serious plans to achieve that goal, we can avoid a disaster. We can keep the climate bearable for everyone, help hundreds of millions of poor people make the most of their lives, and preserve the planet for the generations to come.