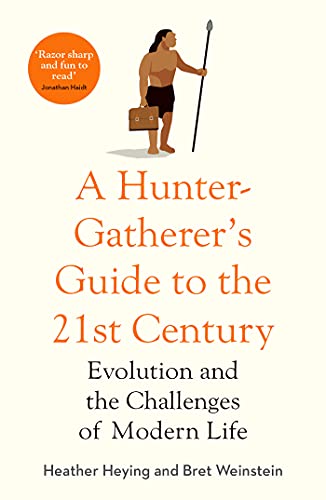 We live in a hyper-novel world. Our species’ pace of change outstrips our ability to adapt. We are generating new problems at a new and accelerating rate, and it is making us sick—physically, psychologically, socially, and environmentally.

Although in times of great change a progressive attitude is appropriate, before we transform our lives significantly we should consider Chesterton's fence principle: messing with an ancient system that you do not fully understand may create problems that you do not foresee.

From diet, to sleep, to sex, we need to understand what is evolutionary true, and build carefully on top of that. Importantly, we need a campfire renaissance. Campfires both metaphorical and literal are a convergence point for culture and consciousness, where people come together in good faith to learn the old wisdom and to challenge it.

On the Human Niche

Species are defined by their niche: the particular way they interact with and find a way to make a living in their environment. To be dominant in any one niche, a species must typically specialize, sacrificing breadth and generality.

Yet somehow here we are, jacks of nearly every trade imaginable, and simultaneously the masters of nearly every habitat on Earth. We enjoy the competitive advantage of being specialists, without paying the usual costs of a lack of breadth. This is the paradox of the human niche.

We are a generalist species that contains individuals who are often specialists. As our world becomes increasingly complex, though, the need for generalists grows. We need people who know things across domains, and who can make connections between them.

[Culture is old wisdom. Consciousness is new insights.] When we face problems for which our prior understanding is inadequate, we become conscious. We plug our minds into a shared problem-solving space and share what we know. Then we parallel process—proposing hypotheses, providing observations, offering challenges—until we arrive at a new answer, one that an individual would rarely reach alone. If the result works well when tested in the world, it gets refined and then driven into a more automatic, less deliberative layer. This is culture.

Consciousness and culture are in tension with each other, and humans need both. Consciousness is valuable for problem-solving, culture for execution.

That said, novel levels of novelty, such as we are experiencing now, are a special danger. This means that what's needed today-and urgently-is a call to consciousness on a scale that we have not seen before.

The sacred vs. The shamanic

The sacred is the reification of received religious wisdom, the sine qua non of a particular religious tradition, that which has stood the test of time and proved valuable enough to the ancestors to be passed on as holy.

The shamanistic is high risk, high creativity. It has a high mutation rate, and therefore a high error rate. It explores a huge number of new ideas, most of which are poor. It challenges orthodoxy-that which is sacred. The shamanistic is practically mandated to explore and play with cultural norms. It does this in a variety of ways, such as through altered states of consciousness, which include dreams, trances, and use of hallucinogens.

In nearly every known culture there is use of something, be it strictly hallucinogenic or not, that breaks a person out of the normal, everyday experience and allows for a different perspective to emerge. This is consciousness revolutionizing culture.

When the ancestral wisdom runs out, humans pool their dissimilar experiences and expertise to discover how to bootstrap some new way of being. Identifying when the ancestral wisdom has run out in a particular domain is tough, and there will always be tension between those who want to stay the course and those who are looking to break with tradition and try a new way. Functional systems need those advocating for both-for culture and for consciousness, for orthodoxy and heterodoxy, for the sacred and the shamanistic.

On raising children and the role of education

→ It is imperative that children experience discomfort in each of these realms: physical, psychological, and intellectual. Absent that, they end up full-grown but confused about what harm actually is. They end up children in the bodies of adults.

→ Humans are antifragile: We grow stronger with exposure to manageable risks, with the pushing of boundaries. As we grow into adults, exposure to discomfort and uncertainty—physical, emotional, and intellectual—is necessary if we are to become our best selves.

→ Children are perfectly designed to acquire, and to want to acquire, the skill set that they will need as adults. We moderns have disrupted this to a remarkable degree. Children will self-program, if we let them.

→ One set of goals for higher ed ought to be to teach students how to hone their intuitions, become experienced enough in the world to reliably recognize patterns, return to first principles when trying to explain observed phenomena, and reject authority-based explanations.

→ Perhaps school should serve the purpose of helping young people grapple with the question: Who am I, and what am I going to do about it? Another way of phrasing this might be: What’s the biggest and most important problem I can solve with my gifts and skills?

On fairness and comparison

Monkeys keep track of what's fair, and what's not, and they have decided opinions about unfair practices in their social realm. Capuchins-New World Monkeys that live in large social groups-will, in captivity, barter with people all day long, especially if food is involved. I give you this rock and you give me a treat to eat. If you put two monkeys in cages next to each other, and offer them both slices of cucumber for the rocks they already have, they will happily eat the cucumbers. If, however, you give one monkey grapes instead-grapes being universally preferred to cucumbers-the monkey that is still receiving cucumbers will begin to hurl them back at the experimenter.

Markets prey on our sense of fairness. They fool us into thinking that everyone else is getting grapes, while we are stuck with cucumber. If other people already have those better things, why don't we? Our sense of fairness is thus kept off balance, always threatened by the invisible other consumers who already have the next big thing, and thus must be doing better than we are. We are still trying to keep up with the Joneses, but the Joneses are no longer our neighbors. They are now a tiny fraction of the world's elite piped into our screens, and photoshopped to boot.

On addiction and boredom

Give rats a lever that provides amphetamine on demand, and sure, they press the lever. If there is nothing else available to them, they become addicts. Give them an enriched environment, though, with lots of other cool rat stuff to do, and they don't become addicts.

Every drug, or other potential object of addiction, creates a level of reward that varies with other parameters. "Reward" is not binary-it is not simply a positive or a negative. The valence and size of the reward depend, in part, on what the other possibilities are-the opportunity cost. That is, the cost-benefit analysis is incomplete until you compare it to what else you could be spending the time on.

What the rat enrichment experiments suggest is that one contributor to addiction can be boredom. Or more specifically, a lack of awareness, or obfuscation, of opportunity cost.

Boredom is effectively synonymous with the "opportunity cost" having gone to zero: if you believe there is nothing else enriching that you could spend your time on, then the calculation of whether or not to engage with a particular substance or action is skewed, particularly if that substance or action results in a feeling of enrichment, even a false one.

Sexual size dimorphism is a strong predictor of polygyny across vertebrate species. Men are, on average, about 15 percent larger than females, and significantly stronger. This tells us that our ancestors were at least somewhat polygynous or promiscuous.

‍The polygyny in our evolutionary past shouldn’t surprise us—none of the other extant great ape species are monogamous. But Homo sapiens have apparently been evolving in the direction of monogamy since our divergence from chimps and bonobos—we are less sexually dimorphic than either of those species. And while the majority of human cultures have been polygynous at some point in time, the majority of people alive today belong to cultures in which monogamy is the norm.

In spite of its stodgy reputation, monogamy is the best mating system. It creates more competent adults [long term commitment], reduces the tendency to engage in violence and warfare [each person has one mate], and fosters cooperative impulses [raising kids].