The Laws of Human Nature by Robert Greene 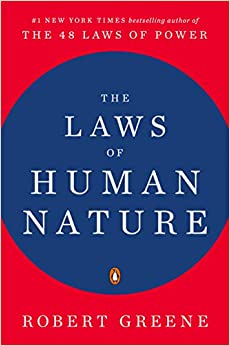 Some people assume that today we are so sophisticated and technologically advanced, so progressive and enlightened that we have moved well beyond our primitive roots. But the truth is in fact the opposite—we have never been more in the thrall of human nature and its destructive potential than now. And by ignoring this fact, we are playing with fire.

If we want to sustainably move forward, we need to understand ourselves first, and integrate our shadow, our envy, aggression, ambition, our need for attention and other fundamental aspects of human nature. This work takes patience and increased self-awareness.

Why we developed emotions

The survival of our earliest ancestors depended on their ability to communicate with one another well before the invention of language. They evolved new and complex emotions—joy, shame, gratitude, jealousy, resentment, et cetera. The signs of these emotions could be read immediately on their faces, communicating their moods quickly and effectively.

For millions of years, living organisms depended on finely tuned instincts for survival. In a split second, a reptile could sense danger in the environment and respond with an instantaneous flight from the scene. There was no separation between impulse and action. Then, slowly, for some animals this sensation evolved into something larger and longer—a feeling of fear. In the beginning this fear merely consisted of a high level of arousal with the release of certain chemicals, alerting the animal to a possible danger. With this arousal and the attention that came with it, the animal could respond in several ways instead of just one.

Later on, cognitive powers developed in animals and humans, culminating in the invention of language and abstract thinking.

Emotions originate as physical arousal designed to capture our attention and cause us to take notice of something around us. They begin as chemical reactions and sensations that we must then translate into words to try to understand. But because they are processed in a different part of the brain from language and thinking, this translation is often slippery and inaccurate.

In other words, we do not have conscious access to the origins of our emotions and the moods they generate. Once we feel them, all we can do is try to interpret the emotion, translate it into language.

The Shadow consists of all the qualities people try to deny about themselves and repress. The Shadow lies buried deep within, but it becomes disturbed and active in moments of stress, or when deep wounds and insecurities are triggered

The Shadow is created in our earliest years and stems from two conflicting forces that we felt. The need to express our thoughts and feelings, and the need to belong to the group.

We came into this world bursting with energy and intensity. We did not understand the difference between acceptable and unacceptable behavior; we only experienced natural impulses. Some of these impulses were aggressive, selfish, not accepted by our parents or - later on - teachers and authoritative figures.

As we grow up the need to fit into the group becomes a primary motivation, and so we learn to tamp down and restrain the dark side of our personality.

Most of the time we secretly suffer from the endless social codes we have to adhere to. We have to seem so nice and agreeable, always going along with the group. We better not show too much confidence or ambition. Seem humble and similar to everyone else; that’s how the game is played. In following this path we gain comfort by fitting in, but we also become defensive and secretly resentful.

One way to begin [to integrate your Shadow] is to, for instance, take note of any particular one-sided, empathic traits in yourself. Assume that the opposite trait lies buried deep within, and from there try to see more signs of this trait in your behavior.

Envy occurs most commonly and painfully among friends. It is a fundamental fact of human nature that our emotions are almost always ambivalent, rarely pure and simple. We can feel love and hostility at the same time, or admiration and envy. This ambivalence began in our childhood and set the pattern for the rest of our lives.

Part of the reason for this essential ambivalence is that strong, pure emotions are frightening. They represent a momentary loss of control. They seem to negate our willpower. We unconsciously balance them with contrary or conflicting emotions.

The most common trigger is a sudden change in your status, which alters your relationship to friends and peers.

If you have any natural gifts that elevate you above others, you must be aware of the dangers and avoid flaunting such talents. Instead you want to strategically reveal some flaws to blunt people’s envy and mask your natural superiority.

How to be less envious?

You must stop denying the reality of your own aggressive tendencies. You are on the aggressive spectrum, like all of us.

This assertive energy must be expended in some way and will tend to go in one of three directions. First, we can channel this energy into our work, into patiently achieving things (controlled aggression). Second, we can channel it into aggressive or passive-aggressive behavior. Finally, we can turn it inward in the form of self-loathing, directing our anger and aggression at our own failings and activating our internal saboteur (more on this later).

You need to admit to yourself that you have a deep desire to have an effect on people, to have power, and to realize this you must develop higher social and technical skills, must become more patient and resilient.

We are born with a powerful energy that is distinctly human. We can call it willpower, assertiveness, or even aggression, but it is mixed with our intelligence and cleverness. It was revealed to us in its purest state in childhood. This energy made us bold and adventurous, not only physically but mentally, wanting to explore ideas and soak up knowledge. It made us actively search for friends with whom we could explore together. It also made us rather relentless when it came to solving problems or getting what we wanted.

Being assertive and adventurous could lead to some failed action, making us feel exposed and vulnerable. If we express this energy too much, people may not like us. We could stir up conflict.

The saboteur operates like a persecutor from within, continually judging and attacking us. If we are about to attempt something, it reminds us of the potential for failure. It tries to tamp down any exuberance, because that could open us to criticism from others. It makes us uncomfortable with strong sensations of pleasure or the expression of deep emotion. It impels us to tamp down our ambitions, the better to fit into the group and not stand out. It wants us to retreat inward, where we can protect ourselves, even if that leads to depression. And it makes us forge a fake self to present to the world, one that is humble and self-effacing.

In the end, the internal saboteur works to lower our energy and constrain what we do, making our world more manageable and predictable but also quite dead. It is the same goal as the aggressor—gaining control over uncertainty—but through the opposite means.

This energy needs to be embraced as totally human and potentially positive. What we must do is tame and train it for our own purposes.

This energy needs to be embraced as totally human and potentially positive. What we must do is tame and train it for our own purposes. Instead of being chronically aggressive, passive-aggressive, or repressed, we can make this energy focused and rational. Like all forms of energy, when it is concentrated and sustained, it has so much more force behind it.

To say you’re ambitious in the world today is often to admit to something slightly dirty, perhaps revealing too much self-absorption.

Tamping down your youthful ambitions is a sign that you don’t like or respect yourself; you no longer believe you deserve to have the power and recognition you once dreamed about. That doesn’t make you more adult, simply more likely to fail—by lowering your ambitions, you limit your possibilities and diminish your energy. In any event, in trying to appear unambitious, you are just as self-absorbed as anyone else; being so humble and saintly is your ambition, and you want to make a display of it.

What you must understand is the following: almost nothing in the world can resist persistent human energy. Things will yield if we strike enough blows with enough force. Look at how many great people in history have succeeded in this way. It was painstaking persistence over several years