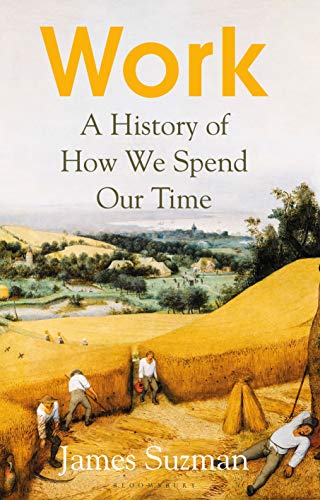 The economic problem insists that we need to always work more in order to meet our infinite needs, because there are limited resources available around us. However, a study of the hunter-gatherer's way of life reveals that economic scarcity is a concept that pervaded our minds and society only with the beginning of farming.

Hunter-gatherers in fact had a few material desires, which could be satisfied with a few hours of effort. Their economic life was organised around the presumption of abundance. Farmers on the other hand, had a much more complex and energy-instensive work to do. They had to protect the soil from the weeds, germs, and bad weather, and the cattle from predators and thieves. On top of that, the constantly growing population meant more demand for food, which meant more work to do.

In a nutshell, farmers had to work much harder than their hunter-gatherers ancestors to meet their basic needs. The shift to agriculture only paid off recently with the Industrial Revolution, which created enough wealth to increase the quality of life for many people.

However, the concept of scarcity, which farmers experience on a constant basis, is still influencing how we organize our economic life today. And it really shouldn't.

Entropy’s eternal diktat that the more complex a structure, the more work must be done to build and maintain it applies as much to our societies as it does to our bodies. It takes work to transform clay into bricks and bricks into buildings in the same way it takes energy to transform fields of grain into loaves of bread. Accordingly, the complexity of any particular society at any particular time is often a useful measure for the quantities of energy that they capture, and also the amount of work (in the raw, physical sense of the word) that is needed to build and then maintain this complexity.

Human work is purposeful, they insisted, whereas the work done by animals is only ever purposive. It is an important distinction.

Being purposeful requires an intuitive grasp of causality, the agility to imagine an outcome arising from an action, and so also implies having ‘a theory of mind’. Debates about how purposeful different animals are relative to humans remain as contested as ever.

There are also many other species who, like us, seem to spend an awful lot of energy doing work that seems to serve no obvious purpose or who have evolved physical and behavioural traits that are hard to account for because they seem so ostentatiously inefficient.

An industrious male masked weaver will build around twenty-five nests in a single season, in the hope of attracting a small harem of females to occupy some and later present him with clutches of eggs.

One individual weaver’s life in a garden in Zimbabwe’s capital, Harare, was diligently documented over a period of several years in the 1970s. As unlucky in love as he was hard-working, he ended up destroying 158 of the 160 nests he built, one-third of them within a couple of days of weaving in the final grass thread. Masked weavers’ nests are complex, energy-intensive constructions. It can take up to a week to build a nest, although some gifted builders can produce one in a day if there are enough of the right building materials nearby.

Evolutionary biologists usually take a strictly utilitarian approach to explain these behaviours. To them the history of life is basically a tale of sex and death, and all the rest is window dressing. All traits that have survived the mill of natural selection must, they insist, be accounted for ultimately in terms of the extent to which they aid or diminish an organism’s chances of survival or reproducing, by offering it some kind of competitive advantage in the energy quest or the quest for a mate. They might argue that the reason why weavers build and destroy sequences of nests is to signal their fitness to prospective mates or to stay in top condition to avoid potential predators. Strangely, however, we are reluctant to resort to similar explanations for equally energy-profligate displays by humans. After all, many of the things humans expend energy on – from building ever grander, more ostentatious skyscrapers to running ultra-marathons – are hard to reconcile with reproductive fitness or survival. Indeed, many of the things we do to expend energy risk reducing our lifespans rather than extending them. It may well be that the ultimate explanation for why weavers build with such profligacy is that, like us, when they have surplus energy, they expend it by doing work in compliance with the law of entropy.

It is possible that the weavers’ nest-building-and-destroying habit is a vestigial trait and that it once served some easily identifiable and important purpose. A far more intriguing possible explanation is that they repeatedly build and destroy their nests for no other reason than the fact that they have energy to burn.

The idea that we have infinite wants but that all resources are limited sits at the beating heart of the definition of economics as the study of how people allocate scarce resources to meet their needs and desires. It also anchors our markets, financial, employment and monetary systems. To economists, then, scarcity is what drives us to work, for it is only by working – by making, producing and trading scarce resources – that we can ever begin to bridge the gap between our apparently infinite desires and our limited means. But the problem of scarcity offers a bleak assessment of our species. It insists that evolution has moulded us into selfish creatures, cursed to be forever burdened by desires that we can never satisfy.

We now know that hunter-gatherers like the Ju/’hoansi did not live constantly on the edge of starvation. Rather, they were usually well nourished; lived longer than people in most farming societies; rarely worked more than fifteen hours a week, and spent the bulk of their time at rest and leisure. We also know that they could do this because they did not routinely store food, cared little for accumulating wealth or status, and worked almost exclusively to meet only their short-term material needs.

Where the economic problem insists that we are all cursed to live in the purgatory between our infinite desires and limited means, hunter-gatherers had few material desires, which could be satisfied with a few hours of effort. Their economic life was organised around the presumption of abundance rather than a preoccupation with scarcity. And this being so, there is good reason to believe that because our ancestors hunted and gathered for well over 95 per cent of Homo sapiens’ 300,000-year-old history, the assumptions about human nature in the problem of scarcity and our attitudes to work have their roots in farming.

When viewed against the backdrop of millions of years of human history, the transition from foraging to food production was as revolutionary as anything before or since. It transformed how people lived, what they thought about the world, how they worked, and rapidly increased the amount of energy people could capture and put to work. It also happened in the blink of an evolutionary eye. But none of those who were part of this revolution thought of themselves as doing anything particularly remarkable. After all, viewed against the span of a single human lifetime or even against that of several consecutive generations, the adoption of agriculture was a gradual transition during which people and a whole series of plants and animals slowly but inexorably bound their destinies ever closer to one another, and in doing so changed one another forever.

Over a 5,000-year period beginning a little over ten millennia ago, a sequence of unrelated populations in at least eleven distinct geographical locations across Asia, Africa, Oceania and the Americas began cultivating some crops and rearing a variety of domesticated animals. Quite why or how this happened nearly simultaneously remains something of a mystery. It may have been an astonishing coincidence. It is far more likely, though, that this at first apparently unlikely convergence was catalysed by a series of climatic, environmental, cultural, demographic and possibly even evolutionary drivers.

As farming societies grew more productive and captured more energy from their environments, energy appeared to be scarcer and people had to work harder to meet their basic needs. This was because, up until the Industrial Revolution, any gains in productivity farming peoples generated as a result of working harder, adopting new technologies, techniques or crops, or acquiring new land were always soon gobbled up by populations that quickly grew to numbers that could not be sustained.

‍As a result, while agricultural societies continued to expand, prosperity was usually only ever fleeting, and scarcity evolved from an occasional inconvenience that foragers stoically endured every once in a while to a near perennial problem. In many respects, the hundreds of generations of farmers who lived before the fossil-fuel revolution paid for our extended lifespans and expanded waistlines now by enduring lives that were mostly shorter, bleaker and harder than ours, and almost certainly tougher than those of their foraging ancestors.

For subsistence farming societies in other words, the ‘economic problem’ and scarcity was often a matter of life and death. And the only obvious solution to it involved working harder and expanding into new territory. It is perhaps unsurprising, then, despite the fact that hardly any of us now produce our own food, that the sanctification of scarcity and the economic institutions and norms that emerged during this period still underwrite how we organise our economic life today.

Where history is a better guide to the future is on the nature of change. It reminds us that we are a stubborn species: one that is deeply resistant to making profound changes in our behaviour and habits, even when it is clear that we need to do so. But it also reveals that when change is forced upon us we are astonishingly versatile.

This being so, while automation and AI have made it possible for us to embrace a profoundly different future, it is unlikely that it will be the catalyst that causes the dramatic changes in ‘social customs and economic practices’ that Keynes envisaged. Far more likely catalysts take the form of a rapidly changing climate, like that which spurred the invention of agriculture; anger ignited by systematic inequalities like those that stirred the Russian revolution; or perhaps even a viral pandemic that exposes the obsolescence of our economic institutions and working culture, causing us to ask what jobs are truly valuable and question why we are content to let our markets reward those in often pointless or parasitic roles so much more than those we recognise as essential.

The principal purpose [of this book], however, has been to loosen the claw-like grasp that scarcity economics has held over our working lives, and to diminish our corresponding and unsustainable preoccupation with economic growth. For by recognising that many of the core assumptions that underwrite our economic institutions are an artefact of the agricultural revolution, amplified by our migration into cities, frees us to imagine a whole range of new, more sustainable possible futures for ourselves, and rise to the challenge of harnessing our restless energy, purposefulness and creativity to shaping our destiny.