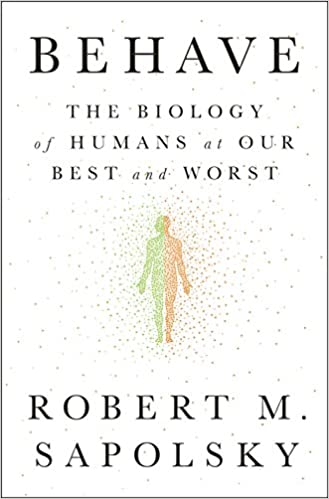 Although one might assume that the rational brain is superior to the emotional brain, in reality they both play crucial roles. You want to keep them both.

The context and meaning of a behavior are usually more interesting and complex than the mechanics of the behavior. To understand things, you must incorporate neurons, hormones, early development, genes, etc., Biology is about propensities, potentials, vulnerabilities, predispositions, proclivities, etc.

In other words, our behavior is driven by incredibly complex unconscious processes. Because we can’t see them or comprehend them, we tend to judge behavior as if we were fully in control of them.

We tend to believe in free will, not just because we have a terrible need for agency but also because most people know next to nothing about those internal forces driving their behaviors. At the moment, even science as a whole still knows about only a handful of those internal forces.

It's really hard to live your life as if there is no free will. It may never be possible to view ourselves as the sum of our biology.

⇾The brain can be divided in three parts, although anatomically there is considerable overlap among the three layers.

⇾ The flow of information and commands is not only top down but also from bottom to top.

⇾ The brain has left and right sides. Left is more analytical, right is more intuition and creativity. However, the differences between the hemispheres are generally subtle.

⇾ The amygdala activates when it is dealing with unpredictable pain, not knowing when you are going to experience it. Even if you were expecting a reward, but it's not sure exactly when and how, the amygdala creates the anxiety and fear and anger that the reward may be smaller than anticipated, or may not even happen. This is because the neurons activated in these circumstances are paying attention to change, independent of direction. For them, “the amount of reward is changing” and “the amount of punishment is changing” are the same.

⇾ We don't inherit innate fears (such as of snakes, f.e.). Rather, we show "prepared learning" - we are afraid of them more readily.

⇾ The prefrontal cortex is involved with executive decisions, gratification postponement, long-term planning, regulation of emotions, reining in impulsivity. It's the last region of the brain to fully mature (mid-twenties). This is good news: because it is the last to mature, by definition the frontal cortex is the brain region least constrained by genes and most sculpted by experience.

⇾ When the PFC is working hard, it consumes lots of energy. The frontal cortex runs “as if” experiments of gut feelings—“How would I feel if this outcome occurred?”—and makes choices with the answer in mind.

⇾ Rationality or emotions? Absolutely both. People with damaged vmPFC (rationality) receive no input from the limbic system (emotion), have no gut feelings. As a consequence, not only they have trouble making decisions but also make bad ones. They show poor judgment in choosing friends and partners and don’t shift behavior based on negative feedback.

⇾ A simplistic view is that the vmPFC and dlPFC perpetually battle for domination by emotion versus cognition. But while emotion and cognition can be somewhat separable, they’re rarely in opposition.

⇾ Our dopamine system codes for discrepancy from expectation:

⇾ Today we have access to over-the-top non-natural sources of reward (e.g. snacks, social media, etc.). If we were designed by engineers, the more we have, the less we'd crave. Unfortunately we are designed to habituate fast to new standards, and the more we consume, the hungrier we get. More and faster and stronger. What was an unexpected pleasure yesterday is what we feel entitled to today, and what won’t be enough tomorrow. Since it gets harder and harder to have that dopamine rush, we are often left with a void inside. Another consequence is that we have less and less capacity to pay attention to small valuable things (leaves falling in autumn, lingering glance of the right person).

⇾ Once a reward pattern is learned, dopamine is less about reward than about its anticipation.

⇾ Oxytocin is released when we experience a prosocial behavior (being trusted, receiving a warm touch, etc.) However, oxytocin is not a universal luv hormone. It increase prosociality only toward an "Us". When dealing with "Thems", they make us more ethnocentric and xenophobic.

⇾ Stress makes it hard to unlearn fear, to “extinguish” a conditioned fear association. This involves the prefrontal cortex, which causes fear extinction by inhibiting the BLA (basolateral amygdala); stress weakens the PFC’s hold over the amygdala.

⇾ During stress, that sensory shortcut from the thalamus to the amygdala becomes more active, with more excitable synapses; we know the resulting trade-off between speed and accuracy. The amygdala processes emotional sensory information more rapidly and less accurately, dominates hippocampal function, and disrupts frontocortical function; we’re more fearful, our thinking is muddled, and we assess risks poorly and act impulsively out of habit, rather than incorporating new data.

⇾ The essence of learning doesn’t require new synapses, it requires the strengthening of preexisting synapses. The lecturer says something, and it goes in one ear and out the other. The factoid is repeated; same thing. It’s repeated enough times and—aha!—the lightbulb goes on and suddenly you get it.

⇾ Why going to school is (really) important? To learn social competence. Peer interactions teach social competence—context-dependent behavior, when to be friend or foe, where you fit in hierarchies.

⇾ The best way to learn things is through play. Play is vital. A child deprived of or disinterested in play rarely has a socially fulfilling adult life.

⇾ Our genes are not deterministic. They are highly influenced by the environment.

⇾ Asian cultures are more collectivist than individualist America. Culture is shaped by the way people traditionally made a living, which in turn is shaped by ecology. And in East Asia it’s all about rice. Rice requires massive amounts of communal work.

⇾ The year 2008 marked a human milestone, a transition point nine thousand years in the making: for the first time, the majority of humans lived in cities.

⇾ Roughly 95 to 99 percent of hominin history has been spent in small, nomadic bands that foraged for edible plants and hunted cooperatively.

⇾ Given that prehistoric HGs didn’t have lots of material possessions that have lasted tens of thousands of years, they haven’t left much of an archaeological record. Insight into their minds and lifestyle comes from cave paintings dating back as much as forty thousand years. Though paintings from around the world show humans hunting, hardly any unambiguously depict interhuman violence.

⇾ HG were no angels. However, war as we know it seems to have been rare until most humans abandoned the nomadic HG lifestyle.

⇾ Evolution is about reproduction, not survival. As a matter of fact, you can consider the "antagonistic pleiotropy" which refers to traits that increase reproductive fitness early in life yet decrease life span. E.g. primates’ prostates have high metabolic rates, enhancing sperm motility. Upside: enhanced fertility; downside: increased risk of prostate cancer.

⇾ We are neither bonobos nor chimps, we’re equally related to both.

⇾ We aren’t classically monogamous or polygamous. As everyone from poets to divorce attorneys can attest, we are by nature profoundly confused—mildly polygynous, floating somewhere in between.

⇾ The human male drive to maximize reproductive success is shown by a key fact—the most common cause of individual human violence is male-male competition for direct or indirect reproductive access to females.

⇾ The context and meaning of a behavior are usually more interesting and complex than the mechanics of the behavior. To understand things, you must incorporate neurons and hormones and early development and genes, etc., etc. These aren’t separate categories—there are few clear-cut causal agents, so don’t count on there being the brain region, the neurotransmitter, the gene, the cultural influence, or the single anything that explains a behavior. Instead of causes, biology is repeatedly about propensities, potentials, vulnerabilities, predispositions, proclivities, interactions, modulations, contingencies, if/then clauses, context dependencies, exacerbation or diminution of preexisting tendencies. Circles and loops and spirals and Möbius strips.

⇾ Often, what seems like rationality is often just rationalization, playing catch-up with subterranean forces that we never suspect.

⇾ The larger your social network, the larger your prefrontal cortex. And vice versa. This gives the person’s better Theory of Mind–related skills.

⇾ Low socioeconomic status predict lower health. However, it’s not about being poor. It’s about feeling poor. It's the psychological stress of low SES that decreases health.

⇾ Our brain is wired for conformity. It takes less than 200 milliseconds to register that the group has picked a different answer from yours, and less than 380 milliseconds for a profile of activation that predicts changing your opinion.

⇾ When you realize that everyone else disagree with you, there is an activation of the (emotional) vmPFC, the anterior cingulate cortex, and the nucleus accumbens. The information registers not only that we're different from everyone else, but that we’re wrong. Being different = being wrong. The greater the activation, the more likely you will conform.

⇾ Judging more easily our misbehaviors reflects cognitive fact that we judge ourselves by our internal motives and everyone else by their external actions.

⇾ Moral discounting happens when something you would care for happens far away from you.

⇾ Is there ever a selfless act that contains no element of self-interest? Pure selflessness is clearly an uphill battle if the very part of the brain most central to an empathic state—the ACC (anterior cingulate cortex)—evolved to observe and learn from others’ pain for your own benefit.

⇾ Moses Maimonides: “The purest form of charity, the most stripped of self-interest, is when both the giver and the recipient are anonymous.”

⇾ The brain has trouble distinguishing between having a dirty behavior and being in need of a bath. If we hold a cold cup we evaluate someone's personality as colder. Metaphors about weight, density, texture, temperature, interoceptive sensations, time, and distance are just figures of speech. Yet the brain confusedly processes them with some of the same circuits that deal with the physical properties of objects.

⇾ This is because evolution is a tinkerer, an improviser, rather than a state-of-the-art craftsman. It operates fast, taking from what it has at disposal and re-using stuff.

⇾ If someone had their entire frontal cortex destroyed, you probably shouldn’t hold them responsible for their actions. However, legally speaking, deciding how much percent of the frontal cortex has to be damaged is like drawing lines in the sand. So for now we hold them accountable.

⇾ Studies have shown that signals to initiate a movement appear about half a second before the reported time of conscious intent to move from participants. This would mean that free will is an illusion.

⇾ However, another interpretation (know as "free won't") is that yes, the brain initiate behaviors before conscious awareness, but in the lag time there is the potential to consciously choose to veto that action.

⇾ It's really hard to live your life as if there is no free will. It may never be possible to view ourselves as the sum of our biology.