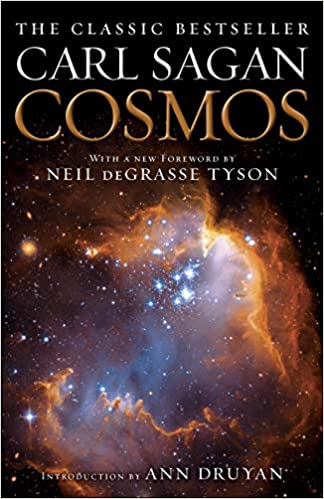 As far as we know, complex lifeforms with specialized organs are hard to evolve. There might be abundant microbes on other planets, but no big beasts and vegetables. However, it’s important to keep in mind that far more species have become extinct in the history of the Earth than exist today.

The evolution of life requires a more or less precise balance between mutation and selection. Around 600 million years ago an enormous proliferation of new life forms emerged,called the Cambrian explosion. Since then exquisite new adaptations followed one another with comparatively breathtaking speed. In rapid succession fishes, vertebrates, winged insects, amphibians, reptiles, dinosaurs, mammals, birds, cetaceans, primates, apes and humans appeared.

We are fortunate: we are alive; we are powerful; the welfare of our civilization and our species is in our hands. Our explorations can be carried out only on behalf of all the people of the planet Earth. Hopefully, will invest our energies in an enterprise devoted not to death but to life: the expansion of our understanding of the Earth and its inhabitants and the search for life elsewhere.

→ Humans have evolved to wonder. Understanding is a joy, knowledge is prerequisite to survival.

→  Cosmos is a Greek word for the order of the universe. It is, in a way, the opposite of Chaos. It implies the deep interconnectedness of all things.

→ Perhaps the origin and evolution of life is, given enough time, a cosmic inevitability. Some species arise and die out, some never evolve beyond its simplest forms.

→ Large lifeforms with specialized organs are hard to evolve. Perhaps there are many other planets that today have abundant microbes but no big beasts and vegetables.

→ Far more species have become extinct in the history of the Earth than exist today; they are the terminated experiments of evolution. The Earth used to be inhabited by plants and animals of which there is today no living trace. Species appear, abide more or less briefly and then flicker out.

→ The secrets of evolution are death and time—the deaths of enormous numbers of lifeforms that were imperfectly adapted to the environment; and time for a long succession of small mutations that were by accident adaptive, time for the slow accumulation of patterns of favorable mutations.

→ Evolution works through mutation and selection. Mutations might occur during replication if the enzyme DNA polymerase makes a mistake. But it rarely makes a mistake. If the mutation rate is too high, we lose the inheritance of four billion years of painstaking evolution. If it is too low, new varieties will not be available to adapt to some future change in the environment. The evolution of life requires a more or less precise balance between mutation and selection.

→ Sex seems to have been invented around two billion years ago. With the invention of sex, two organisms could exchange whole paragraphs, pages and books of their DNA code-

→ For most of the four billion years since the origin of life, the dominant organisms were microscopic blue-green algae. Then some 600 million years ago, the monopolizing grip of the algae was broken and an enormous proliferation of new life forms emerged, an event called the Cambrian explosion. After the Cambrian explosion, exquisite new adaptations followed one another with comparatively breathtaking speed. In rapid succession, the first fish and the first vertebrates appeared; plants, previously restricted to the oceans, began the colonization of the land; the first insect evolved, and its descendants became the pioneers in the colonization of the land by animals; winged insects arose together with the amphibians, creatures something like the lungfish, able to survive both on land and in the water; the first trees and the first reptiles appeared; the dinosaurs evolved; the mammals emerged, and then the first birds; the first flowers appeared; the dinosaurs became extinct; the earliest cetaceans, ancestors to the dolphins and whales, arose and in the same period the primates—the ancestors of the monkeys, the apes and the humans.

→ The plant uses the carbohydrates it makes as an energy source to go about its planty business. And we animals, who are ultimately parasites on the plants, steal the carbohydrates so we can go about our business. In eating the plants we combine the carbohydrates with oxygen dissolved in our blood because of our penchant for breathing air, and so extract the energy that makes us go. In the process we exhale carbon dioxide, which the plants then recycle to make more carbohydrates. What a marvelous cooperative arrangement—plants and animals each inhaling the other’s exhalations, the entire elegant cycle powered by a star 150 million kilometers away.

→ An oak tree and I are made of the same stuff. If you go far enough back, we have a common ancestor.

→ We are fortunate: we are alive; we are powerful; the welfare of our civilization and our species is in our hands. If we do not speak for Earth, who will? If we are not committed to our own survival, who will be?

→ Science has two rules. First: there are no sacred truths; all assumptions must be critically examined; arguments from authority are worthless. Second: whatever is inconsistent with the facts must be discarded or revised. The obvious is sometimes false; the unexpected is sometimes true.

→ There are a million threads from the past intertwined to make the ropes and cables of the modern world.

→ Human history can be viewed as a slowly dawning awareness that we are members of a larger group. Initially our loyalties were to ourselves and our immediate family, next, to bands of wandering hunter-gatherers, then to tribes, small settlements, city-states, nations. We have broadened the circle of those we love. We have now organized what are modestly described as superpowers, which include groups of people from divergent ethnic and cultural backgrounds working in some sense together—surely a humanizing and character-building experience. If we are to survive, our loyalties must be broadened further, to include the whole human community, the entire planet Earth. The choice, as H. G. Wells once said in a different context, is clearly the universe or nothing.

→ Our explorations can be carried out only on behalf of all the people of the planet Earth. We will invest our energies in an enterprise devoted not to death but to life: the expansion of our understanding of the Earth and its inhabitants and the search for life elsewhere.

We have begun to contemplate our origins: starstuff pondering the stars; organized assemblages of ten billion billion billion atoms considering the evolution of atoms; tracing the long journey by which, here at least, consciousness arose. Our obligation to survive is owed not just to ourselves but also to that Cosmos, ancient and vast, from which we spring.