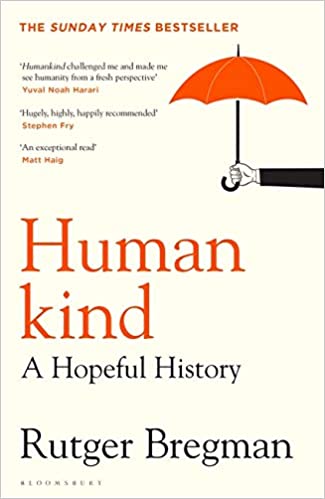 A commonly accepted theory is that humans are by nature selfish and aggressive. Civilisation is nothing more than a thin veneer that will crack at the merest provocation.

Arguing against this belief is hard. For every misanthropic argument you deflate, two more will pop up in its place. However, we must acknowledge that yes, if you push people hard enough they are capable of evil, but evil doesn't live beneath the surface, it takes immense effort to draw it out. And most importantly, it has to be disguised as doing good.

Assuming people are good helps us build a better society. Even if you get cheated on from time to time, trusting people pays off in the long run.

→ There is a persistent myth that by their very nature humans are selfish, aggressive and quick to panic. It’s what Dutch biologist Frans de Waal likes to call veneer theory: the notion that civilisation is nothing more than a thin veneer that will crack at the merest provocation. In actuality, the opposite is true. It’s when crisis hits – when the bombs fall or the floodwaters rise – that we humans become our best selves.

→ The dynamic during disasters is almost always the same: adversity strikes and there’s a wave of spontaneous cooperation in response, then the authorities panic and unleash a second disaster.

→ To stand up for human goodness is to stand up against a hydra – that mythological seven-headed monster that grew back two heads for every one Hercules lopped off. Cynicism works a lot like that. For every misanthropic argument you deflate, two more will pop up in its place. Veneer theory is a zombie that just keeps coming back.

→ Why does veneer theory keep returning in so many permutations? I suspect it has a lot to do with convenience. In a weird way, to believe in our own sinful nature is comforting. It provides a kind of absolution. Because if most people are bad, then engagement and resistance aren’t worth the effort.

→ The first thing to understand about the human race is that, in evolutionary terms, we’re babies. As a species we’ve only just emerged. Imagine that the whole history of life on earth spans just one calendar year, instead of four billion. Up until about mid-October, bacteria had the place to themselves. Not until November did life as we know it appear, with buds and branches, bones and brains. And we humans? We made our entrance on 31 December, at approximately 11 p.m. Then we spent about an hour roaming around as hunter-gatherers, only getting around to inventing farming at 11:58 p.m. Everything else we call ‘history’ happened in the final sixty seconds to midnight: all the pyramids and castles, the knights and ladies, the steam engines and rocket ships.

→ We are kind and loving species, but just to the ones who we think are like us. If they are not, we become the most cruel. Empathy and xenophobia go hand in hand. They’re two sides of the same coin.

→ If you push people hard enough they are capable of evil. But evil doesn't live beneath the surface, it takes immense effort to draw it out. And most importantly, it has to be disguised as doing good.

→ Prejudice, hatred and racism stem from a lack of contact with the stranger. Contact engenders more trust, more solidarity and more mutual kindness.

→ The Pygmalion Effect: helding and communicating positive expectations about someone else's performances will lead that person to perform better.

→ Trusting people pays off. You'll occasionally be cheated, but it's a minor price to pay for a better life and society.

→ War began with sedentary life. The introduction of property gave us reason to fight over, and the settled life made us more distrustful of strangers.

→ The greatest milestone inventions of our civilizations started as instruments of oppression. Coins? Efficient way to levy taxes. Writing? To remember who is a debtor. Law? To punish people who disobey.

→ The switch to civilization only started to pay off in the past few hundred years.

→ Women have superior intuition because for a long time they had to make the effort to see things through male perspectives. Men in power on the other hand didn't bother or care to do so.

→ Yes, humans cooperate on large scale because they believe in stories (such as States). But the threat of violence is an important part of the equation.