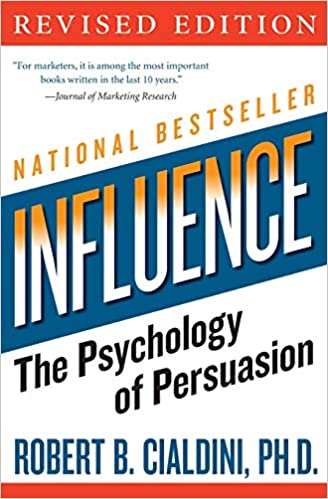 You and I exist in an extraordinarily complicated stimulus environment, easily the most rapidly moving and complex that has ever existed on this planet. To deal with it, we need shortcuts.

There are six main cognitive shortcuts you need to be aware of: reciprocity (repay what we received), consistency (stay consistent with our decisions), social proof (doing what the majority does), liking (favoring people ‘like us’), authority (respecting signs of authority), scarcity (valuing more what is not easily available).

The rule says that we should try to repay, in kind, what another person has provided us. There is no human society that does not subscribe to the rule. Whoever violates the rule is labelled as moocher, ingrate, welsher.

A supermarket operator once sold an astounding one thousand pounds of cheese in a few hours one day by putting out the cheese and inviting customers to cut off slivers for themselves as free samples.

Most of us find it highly disagreeable to be in a state of obligation. For this reason alone, then, we may be willing to agree to perform a larger favor than we received, merely to relieve ourselves of the psychological burden of debt. But there is another reason as well. A person who violates the reciprocity rule by accepting without attempting to return the good acts of others is actively disliked by the social group.

In combination, the reality of internal discomfort and the possibility of external shame can produce a heavy psychological cost.

Rejection-then-retreat technique: suppose you want me to agree to a certain request. One way to increase your chances would be first to make a larger request of me, one that I will most likely turn down. Then, after I have refused, you would make the smaller request that you were really interested in all along. If I want you to lend me five dollars, I can make it seem like a smaller request by first asking you to lend me ten dollars. One of the beauties of this tactic is that by first requesting ten dollars and then retreating to five dollars, I will have simultaneously engaged the force of the reciprocity rule and the contrast principle.

The contrast principle affects the way we see the difference between two things that are presented one after another. Simply put, if the second item is fairly different from the first, we will tend to see it as more different than it actually is. So if we lift a light object first and then lift a heavy object, we will estimate the second object to be heavier than if we had lifted it without first trying the light one.

We have a nearly obsessive desire to be (and to appear) consistent with what we have already done. Once we have made a choice or taken a stand, we will encounter personal and interpersonal pressures to behave consistently with that commitment.

A high degree of consistency is normally associated with personal and intellectual strength. It is at the heart of logic, rationality, stability, and honesty.

Like most other forms of automatic responding, it offers a shortcut through the density of modern life. Once we have made up our minds about an issue, stubborn consistency allows us a very appealing luxury: we really don’t have to think hard about the issue anymore.

But be very careful about agreeing to trivial requests. Such an agreement can not only increase our compliance with very similar, much larger requests, it can also make us more willing to perform a variety of larger favors that are only remotely connected to the little one we did earlier.

E.g. As mentioned by Cialdini in Pre-suasion people were more willing to give away their email address after they were asked "Are you an adventurous person?".

One means we use to determine what is correct is to find out what other people think is correct. The principle applies especially to the way we decide what constitutes correct behavior.

As a rule of thumb, we will make fewer mistakes by acting in accord with social evidence than contrary to it. Usually, when a lot of people are doing something, it is the right thing to do.

The principle of social proof, like all other weapons of influence, works better under some conditions than under others. Especially when we are uncertain, we are willing to place an enormous amount of trust in the collective knowledge of the crowd. We seem to assume that if a lot of people are doing the same thing, they must know something we don’t. What is easy to forget, though, is that everybody else observing the event is likely to be looking for social evidence, too.

There is another important working condition [that affects social proof]: similarity. The principle of social proof operates most powerfully when we are observing the behavior of people just like us.

But we also tend to like more people who are similar to us. This fact seems to hold true whether the similarity is in the area of opinions, personality traits, background, or life-style.

We are trained from birth that obedience to proper authority is right and disobedience is wrong. We learning through our relationship with our parents. Because people authoritative positions speak of superior access to information and power, it makes great sense to comply with their wishes.

Titles are simultaneously the most difficult and the easiest symbols of authority to acquire. A second kind of authority symbol that can trigger our mechanical compliance is clothing. E.g. the police officer uniform.

When our freedom to have something is limited, the item becomes less available, and we experience an increased desire for it.

Probably the most straightforward use of the scarcity principle occurs in the “limited-number” tactic, when the customer is informed that a certain product is in short supply that cannot be guaranteed to last long.

Not only do we want the same item more when it is scarce, we want it most when we are in competition for it. The ardor of an indifferent lover surges with the appearance of a rival. The joy is not in experiencing a scarce commodity but in possessing it.