Mating in Captivity by Esther Perel 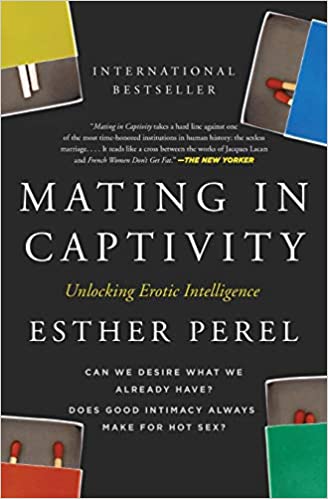 How to introduce uncertainty and gentle imbalance in a relationship to keep it alive? In truth, it is already there, given the transient nature of things. The mistake is believing the fantasy of permanence and security. As soon as we acknowledge that our partners are never granted, sustained desire becomes a real possibility.

⇾ We all have an equally strong need for security and adventure.

⇾ Desire is an enigma; it’s insubordinate, and it chafes at impositions.

⇾ It takes two people to create a pattern, but only one to change it.

⇾ Sex, a harbinger of loss of control, is fraught with uncertainty and vulnerability.

⇾ How to introduce uncertainty and gentle imbalance in a relationship to keep it alive? In truth, it is already there, given the transient nature of things. The mistake is believing the fantasy of permanence and security.

⇾ Madonna/Whore: for long, women's bodies were controlled, and their sexuality was contained, in order to avert their "corrupting" impact on men’s virtue. Two options: seen as a Madonna through association with purity, sacrifice, and frailty; or as a whore if you were earthy, sensual, and lusty.

⇾ Today we turn to one person to provide what an entire village once did: a sense of grounding, meaning, continuity.. but also novelty, romance, sexual and emotional fulfilling.

⇾ What makes sustaining desire over time so difficult is that it requires reconciling two opposing forces: freedom and commitment. It belongs to the category of existential dilemmas that are as unsolvable as they are unavoidable.

⇾ Female eroticism is diffuse, not localized in the genitals but distributed throughout the body, mind, and senses.

⇾ One of the great elixirs of passion is anticipation. You can’t force desire, but you can create an atmosphere where desire might unfurl.

⇾ The exclusiveness we seek in monogamy has roots in our earliest experience of intimacy with our primary caretakers.

⇾ Fidelity is defined not by sexual exclusivity but by the strength of your commitment. The boundaries aren’t physical but emotional.

⇾ The more we choke each other’s freedom, the harder it is for desire to breathe within a committed relationship.

⇾ The grand illusion of committed love is that we think our partners are ours. In truth, their separateness is unassailable, and their mystery is forever ungraspable. As soon as we can begin to acknowledge this, sustained desire becomes a real possibility.