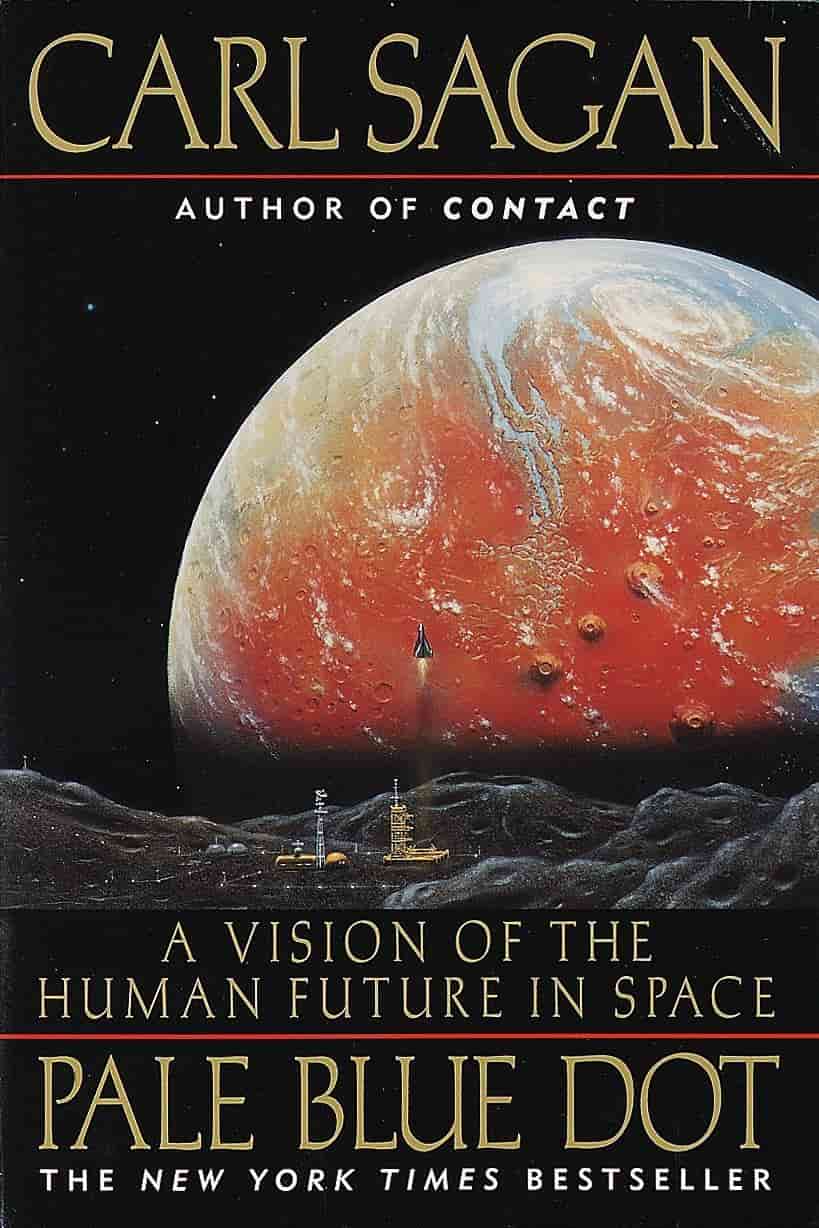 On the scale of worlds—to say nothing of stars or galaxies—humans are inconsequential. In fact, if aliens on a spacecraft were trying to find us even from somewhere as close as between the Earth and the Moon, they couldn’t spot us.

That’s how tiny we are. Yet, our obsessions with power and grandiosity could be the end of us. The significance of our lives and our fragile planet is determined only by our own wisdom and courage. We are the custodians of life's meaning.

Crucially, we need to be mindful of the visions we offer our children. Visions are often self-fulfilling prophecies. “Dreams are maps.”

Our long-term survival is at stake, and we have a basic responsibility to our species venture to other worlds. Our choice is spaceflight or extinction. However, probably it will not be us who reach Alpha Centauri and the other nearby stars. It will be a species very like us, but with more of our strengths and fewer of our weaknesses.

→ The zest to explore and exploit, however thoughtless its agents may have been, has clear survival value.

→ We are too small and our statecraft is too feeble to be seen by a spacecraft between the Earth and the Moon. On the scale of worlds—to say nothing of stars or galaxies—humans are inconsequential, a thin film of life on an obscure and solitary lump of rock and metal.

→ Human uniqueness has been exaggerated, sometimes grossly so.

→ We cannot say we were lucky with our world. We do not know how many other winning hands there are in the cosmic deck, how many other kinds of universes, laws of Nature, and physical constants are possible.

→ The significance of our lives and our fragile planet is then determined only by our own wisdom and courage. We are the custodians of life's meaning. If we crave some cosmic purpose, then let us find ourselves a worthy goal.

→ The Earth is revealed to possess three properties unique at least in this solar system— oceans, oxygen, life.

→ The visions we offer our children shape the future. It matters what those visions are. Often they become self-fulfilling prophecies. Dreams are maps.

→ Before their launch, in August and September 1977, we were almost wholly ignorant about most of the planetary part of the Solar System.

→ Sherwood Rowland and Mario Molina of the University of California discovered that CFCs posed a threat to the ozone layer. No one instructed them to look for dangers to the environment. They were pursuing fundamental research. They were scientists following their own interests. Their names should be known to every schoolchild.

→ Spread out over the waiting time, the dangers of asteroid collision do not seem very worrisome. But if a big impact happens, it would be an unprecedented human catastrophe. There's something like one chance in two thousand that such a collision will happen in the lifetime of a newborn baby. Most of us would not fly in an airplane if the chance of crashing were one in two thousand. In fact for commercial flights the chance is one in two million. Even so, many people consider this large enough to worry about, or even to take out insurance for.

→ Our choice is spaceflight or extinction. If our long-term survival is at stake, we have a basic responsibility to our species venture to other worlds. Sailors on a becalmed sea, we sense the stirring of a breeze.

→ If we continue to accumulate only power and not wisdom, we will surely destroy ourselves. Our very existence in that distant time requires that we will have changed our institutions and ourselves. It will not be we who reach Alpha Centauri and the other nearby stars. It will be a species very like us, but with more of our strengths and fewer of our weaknesses, a species returned to circumstances more like those for which it was originally evolved, more confident, farseeing, capable, and prudent—the sorts of beings we would want to represent us in a Universe.

→ Perhaps, some scientists have imagined, we will one day create new forms of life, link minds, colonize stars, reconfigure galaxies, or prevent, in a nearby volume of space, the expansion of the Universe.

→ Our remote descendants, safely arrayed on many worlds through the Solar System and beyond, will be unified by their common heritage, by their regard for their home planet, and by the knowledge that, whatever other life may be, the only humans in all the Universe come from Earth. They will gaze up and strain to find the blue dot in their skies. They will love it no less for its obscurity and fragility. They will marvel at how vulnerable the repository of all our potential once was, how perilous our infancy, how humble our beginnings, how many rivers we had to cross before we found our way.