Pity the Reader: On Writing with Style by Kurt Vonnegut and Suzanne McConnell 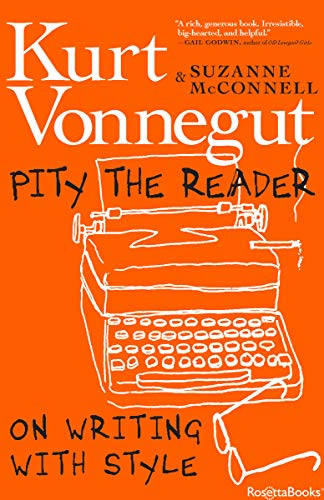 Kurt Vonnegut was a successful and respected writer and teacher. In this book, Suzanne McConnell 一 one of Kurt’s former students 一 encapsulates the essence of his teachings on writing with style.

Kurt believed that you should “write like a human”, about things you care about. You don't have to choose a subject that is important to everyone or filled with drama. The simplest topic will do, as long as you care about it. Also, write in plain English, so that the reader can understand. There is no shame in simplicity, it often conveys deep messages better than convoluted language.

Kurt believed writers have an important role in society and that they are agents of change. Stories, in fact, can activate circuits in the reader’s brain that may prime them to be more socially and emotionally intelligent.

In general, good writing puts readers in a pleasurable, meditative state, so its role in society is essential. The hard part about writing is sitting down for hours on your own, doing the work. While that’s not fun, if you keep at it ‘a Muse’ will often come to you with ideas.

Finally, if you’re going to be a writer, never ever lose your enthusiasm.

Write about things you care deeply about

→ Find a subject you care about and which you in your heart feel others should care about. It is this genuine caring, and not your games with language, which will be the most compelling and seductive element in your style. I am not urging you to write a novel, by the way—although I would not be sorry if you wrote one, provided you genuinely cared about something. A petition to the mayor about a pothole in front of your house or a love letter to the girl next door will do.

→ It’s a risky business, writing about subjects you care about terribly. There are grave dangers. Kurt discovered some of them. I certainly have. I’ll bet my bottom dollar that all fiction writers suffer some of these:

Simplicity of language is sacred

→ Simplicity of language is not only reputable, but perhaps even sacred. The Bible opens with a sentence well within the writing skills of a lively fourteen-year-old: “In the beginning God created the heaven and the earth.” A notion abounds that difficult writing—archaic, convoluted, or chock-full of esoteric words—is somehow elevated, more intelligent than plainspoken language. If you can’t understand it, it must be really superior.

→ Some reviewers dismissed Kurt Vonnegut’s writing for being too simple. John Irving criticized Vonnegut’s critics. They think, Irving wrote, that “if the work is tortured and a ghastly effort to read, it must be serious,” whereas “if the work is lucid and sharp and the narrative flows like water, we should suspect the work of being simplistic, and as light and as lacking in seriousness as fluff. This is simplistic criticism, of course; it is easy criticism too. “Why is ‘readable’ such a bad thing to be these days?” Some people “are gratified by the struggle to make sense of what they read… I am more often gratified by a writer who has accepted the enormous effort necessary to make writing clear.”

→ Kurt Vonnegut said: When I write, I feel like an armless, legless man with a crayon in his mouth. Is this advice? It is for me. It says: You can do it. Every writer feels inept. Even Kurt Vonnegut. Just stick to your chair and keep on typing.

→ Writing is hard work. Writing well is very hard work. It takes courage and perseverance. “You have to sit there,” as Kurt said. “It’s physically uncomfortable, it’s physically bad for someone to sit still that long, and it’s socially bad for a person to be alone that much. The working conditions are really bad. Nobody has ever found the solution to that.”

→ Ask any artist, anyone accomplishing anything of value: patience, perseverance, and work, those humble virtues, rate at least as high as talent on the list of necessary equipment, any day.

Writers are agents of change

→ I think writers are the most important members of society, not just potentially but actually. Good writers must have and stand by their own ideas. Mainly, I think they should be—and biologically have to be—agents of change.

→ Controlled experiments prove Vonnegut right on this most important count: Our brains do know reading is good for us. Especially literary fiction. That’s what the scientific journals NeuroImage, Brain and Language, and the Annual Review of Psychology report. One study found that “after reading literary fiction, as opposed to popular fiction or serious nonfiction, people performed better on tests measuring empathy, social perception and emotional intelligence.” Literary fiction improves social skills. Why? Because it leaves more to the imagination, activating inferences about characters and sensitivity “to emotional nuance and complexity.” Researchers discovered other particulars. The brain, it seems, does not make much of a distinction between reading about an experience and encountering it in real life; in each case, the same neurological regions are stimulated. Fiction—with its redolent details, imaginative metaphors and attentive descriptions of people and their actions—offers an especially rich replica. Indeed, in one respect novels go beyond simulating reality… : the opportunity to enter fully into other people’s thoughts and feelings.

→ Though not scientific, there was plenty of anecdotal evidence of the positive effects of participants’ literary reading: a social worker at a VA hospital said, after I’d assigned a novel about a female soldier in Iraq and her civilian Iraqi counterpart, that she would never again be impatient with the healing process of the women vets she dealt with in the hospital’s rape victim unit.

→ Narrative Medicine is fast becoming a component in medical school curriculums, and literature and writing are increasingly recognized as avenues to sensitize future doctors and enhance their interpersonal skills.

→ Reading exercises the imagination—tempts it to go from strength to strength.… The language is holy to me.… Literature is holy to me.… Our freedom to say or write whatever we please in this country is holy to me. It is a rare privilege not only on this planet, but throughout the universe, I suspect. And it is not something somebody gave us. It is a thing we give to ourselves.

→ A plausible mission of artists is to make people appreciate being alive at least a little bit.

→ As a writer, you bestow the pleasure and balm of reading. You provide the incalculable value of communication by the cheap and accessible means of the written word.

→ If a person with a demonstrably ordinary mind, like mine, will devote himself to giving birth to a work of the imagination, that work will in turn tempt and tease that ordinary mind into cleverness. A painter friend, James Brooks, told me last summer, “I put the first brush stroke on the canvas. After that, it is up to the canvas to do at least half the work.”

→ As a writer, I share a problem, perhaps you could call it a tragedy, with most human beings: a tendency to lose contact with my own intelligence. It’s almost as if there were a layer of fat upon the part of us that thinks and it’s the writer’s job to hack through and discover what is inside. So often it’s this belief, or some such belief, that keeps me going after a day when I’ve been at it for hours and am dissatisfied with what I’ve produced. But I do keep at it and, if I’m patient, a nice egg-shaped idea emerges and I can tell my intelligence has gotten through. It’s a slow process, though, and an annoying one, because you have to sit still so long.

Being a ‘struggling writer’ may boost productivity

→ Vonnegut struggled. If you are a writer, you will probably struggle financially as well. But struggle isn’t bad. Struggle means you’re engaged, you’re learning, striving. What really sucks is listlessness, indifference, purposelessness. Listen to this: the toughest part of Kurt’s life economically was also the most productive.

→ To have ample time to let your own rhythms guide you, to be free of feeling your writing squeezed between necessities is marvelous. The gift of time is no joke. It matters. But the use and quality of the time matters more. In fact, the pressure of that squeeze can make your writing time more sacred and productive.

→ Another “ghastly thing” about hack-writing jobs: they replicate the confines of writing. Who wants to stare at a computer screen after staring at one already for hours? Or play with words for yourself after arranging them for hours for your paycheck? To circumvent that duplication, you might write by hand, or in snatches of time, or in a bar—anywhere distinctly different and more playful than your day job requires.

→ In a 1983 documentary, Kurt reported: I get up at 7:30 and work four hours a day. Nine to twelve in the morning, five to six in the evening. Businessmen would achieve better results if they studied human metabolism. No one works well eight hours a day. No one ought to work more than four hours.