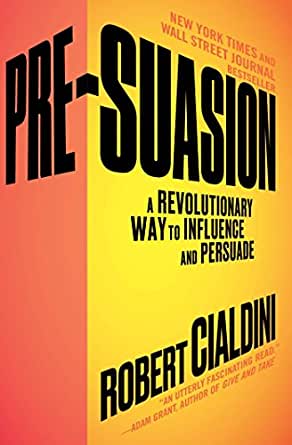 The best persuaders become more influential through pre-suasion—the process of arranging for recipients to be receptive to a message before they encounter it.

No persuasive practice is going to work for sure whenever it is applied. Yet there are approaches that can consistently heighten the probability of agreement. And that is enough. A meaningful increase in those odds is enough to gain a decisive advantage.

In deciding whether a possibility is correct, our mind searches for confirmations of the idea rather than for disconfirmations. Basically the opposite of a scientific approach. The mind is more likely to fire some thoughts when they are readied: after we attend to a specific concept, those concepts closely linked to it enjoy a privileged moment within our minds, acquiring influence that nonlinked concepts simply can’t match.

What is more accessible in mind becomes more probable in action (e.g. if we want people to choose a bottle of French wine, we can expose them to French background music before they decide. If we want people to feel warmly toward us, we can hand them a hot drink.)

⇾ Persuasion is not about making anything sure, it’s about increasing the odds of assent.

⇾ Trust is one of those qualities that leads to compliance with requests, provided that it has been planted before the request is made.

⇾ For any decision maker, a painstaking comparative assessment of multiple options is difficult and stressful, akin to the juggler’s task of trying to keep several objects in the air all at once. The resultant (and understandable) tendency is to avoid or abbreviate such an arduous process by selecting the first practicable candidate that presents itself.

This tendency has a quirky name, “satisficing”—a term coined by economist and Nobel laureate Herbert Simon—to serve as a blend of the words satisfy and suffice. The combination reflects two simultaneous goals of a chooser when facing a decision—to make it good and to make it gone—which, according to Simon, usually means making it good enough.

‍Although in an ideal world one would work and wait until the optimal solution emerged, in the real world of mental overload, limited resources, and deadlines, satisficing is the norm.

⇾ If you were to use the triggers of influence in order it would be:

⇾ Case study: a new soft drink company needed to ask individuals for their email address so they could be sent instructions on how to get a free sample of the product. Half were stopped and asked if they wanted to provide their addresses for this purpose. Most were reluctant—only 33 percent volunteered their contact information. The other subjects were asked initially, “Do you consider yourself to be somebody who is adventurous and likes to try new things?” Almost all said yes—following which, 75.7 percent gave their email addresses.

⇾ There are specific features of an initial gift or favor that increase significantly the chance that it will be returned at high levels of recompense. There are three main features of this sort: in order to optimize the return, what we give first should be experienced as meaningful, unexpected, and customized.

⇾ The implication for effective pre-suasion is plain: pre-suasive openers can produce dramatic, immediate shifts in people, but to turn those shifts into durable changes, it’s necessary to get commitments to them, usually in the form of related behavior. Not all commitments are equal in this respect, however. The most effective commitments reach into the future by incorporating behaviors that affect one’s personal identity. They do so by ensuring that the commitment is undertaken in an active, effortful, and voluntary fashion, because each of these elements communicates deep personal preferences.