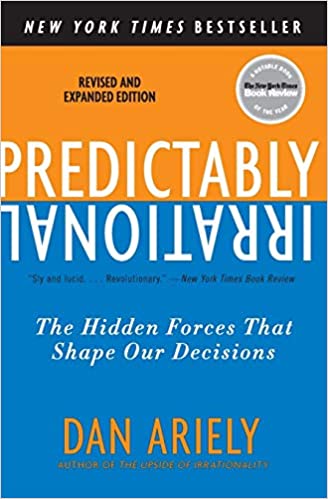 Our irrational behaviors are neither random nor senseless—they are systematic and predictable. We all make the same types of mistakes over and over, because of the basic wiring of our brains. We are pawns in a game whose forces we largely fail to comprehend.

For example, our brain is wired to assess the value of things by comparing them to others. If we compare something in one context it might seem “more, bigger, better”, if we compare it in another it might seem “less, smaller, cheaper”. But the value in itself it's actually the same. Context alters perception.

Our happiness is not affected by what we have, but rather what we don't have, and what we don't have is so easily imaginable. Relativity helps us make decisions in life, but it can also make us miserable because of jealousy and envy of what others have.

Humans rarely choose things in absolute terms. We don’t have an internal value meter that tells us how much things are worth. Rather, we focus on the relative advantage of one thing over another, and estimate value accordingly.

Most people don’t know what they want unless they see it in context.

The black dot is the same size in both positions, but it appears to change depending on what we place next to it.

If you want to lose weight, buy smaller plates. A smaller portion would feel like a lot more.

Relativity helps us make decisions in life. But it can also make us downright miserable. Why? Because jealousy and envy spring from comparing our lot in life with that of others.

Although prices are “arbitrary,” once those prices are established in our minds they will shape not only present prices but also future prices (this makes them “coherent”).

Initial prices are largely “arbitrary” and can be influenced by responses to random questions (E.g: If I ask you how old is your grandpa and you say 87, then I ask you how much are you willing to pay for this jacket 87 will be your anchor.)

Price tags by themselves are not necessarily anchors. They become anchors when we contemplate buying a product or service at that particular price. That’s when the imprint is set. From then on, we are willing to accept a range of prices—but as with the pull of a bungee cord, we always refer back to the original anchor. Thus the first anchor influences not only the immediate buying decision but many others that follow.

Why FREE things are tempting

It’s no secret that getting something free feels very good. Zero is not just another price, it turns out. Zero is an emotional hot button—a source of irrational excitement.

What is it about FREE! that’s so enticing? Why do we have an irrational urge to jump for a FREE! item, even when it’s not what we really want? I believe the answer is this. Most transactions have an upside and a downside, but when something is FREE! we forget the downside.

Humans are intrinsically afraid of loss, and the real allure of FREE! is tied to this fear. There’s no visible possibility of loss when we choose a FREE! item.

Social norms are wrapped up in our social nature and our need for community. They are usually warm and fuzzy. Instant pay-backs are not required: you may help move your neighbor’s couch, but this doesn’t mean he has to come right over and move yours. It’s like opening a door for someone: it provides pleasure for both of you, and reciprocity is not immediately required.

When you are in the domain of market norms, you get what you pay for—that’s just the way it is. When we keep social norms and market norms on their separate paths, life hums along pretty well. When social and market norms collide, trouble sets in.

High level professionals are willing to work for free if they believe they support an important social cause (e.g. helping a population just hit by a earthquake, setting up a school in a poor country). They would work pro bono even if their hourly rate is extremely high. In this case, 0$ is better than let's say 100$ per hour. They do it to support the community, not for the money.

Introducing market norms into social exchanges, as we have seen, violates the social norms and hurts the relationships. Once this type of mistake has been committed, recovering a social relationship is difficult.

When we own something we begin to value it more than other people do. E.g. If you manage to buy a ticket of your favourite artist’s concert, you would sell it only for an incredibly high price (e.g. 2400$). If you didn’t manage to buy a ticket, the maximum you would pay is around 175$. The difference is substantial and it’s given by the endowment effect.

Once we own something, the fear of losing it kicks in, and since we are incredibly averse to loss, it makes us value whatever that “something” is way more than it’s actually worth.