Sex at Dawn by Cacilda Jethá and Christopher Ryan 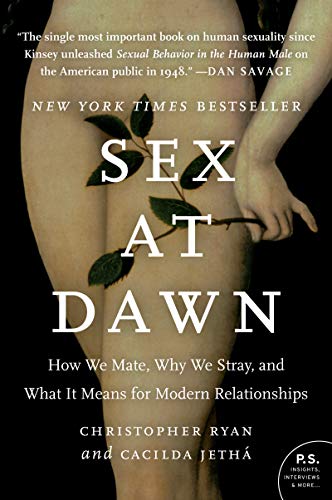 Human beings evolved in intimate groups where almost everything was shared—food, shelter, protection, child care, even sexual pleasure. Culturally imposed sharing was simply the most effective way for our highly social species to minimize risk. For nomadic tribes, sharing and self-interest are not mutually exclusive.

We used to favor group welfare, group identity, profound interrelation, and mutual dependence. Then came the Agricultural revolution that forced our society in the opposite direction, one of private property and individuality.

The biggest loser in the agricultural revolution was the human female, who went from occupying a central, respected role in foraging societies to one where they had to barter their reproductive capacity for access to the resources and protection they needed to survive.

Some behaviors and predilections, such as women’s seemingly consistent preference for men with access to wealth is not a result of innate evolutionary programming, as the standard model asserts, but simply a behavioral adaptation to a world in which men control a disproportionate share of the world’s resources.

These behaviors and predilections are not biologically programmed traits of our species, but adaptations to social conditions of a sedentary society which only represents 5% of our collective experience on this planet, at most.

Pre-agricultural (prehistoric) ancestors lived in groups where most mature individuals would have had several ongoing sexual relationships at any given time. Though often casual, these relationships were not random or meaningless. Quite the opposite: they reinforced crucial social ties holding these highly interdependent communities together.

Today on the contrary infidelity is one of the greatest sins in our society. Many couples who manage to stay together long term do so by sacrificing their eroticism on the altar of three of life’s irreplaceable joys: family stability, companionship, and emotional intimacy. But this sacrifice comes at a great cost.

Couples who want to understand, honor and preserve their sexuality must have uncomfortable conversations and dare to talk about the true nature of their feelings.

Many women will find it difficult to accept that men can so easily dissociate sexual pleasure from emotional intimacy, just as many men will struggle to understand why these two obviously separate (to them) issues are often so intertwined for many women. But with trust, we can strive to accept even what we cannot understand.

→ We didn’t descend from apes. We are apes. Metaphorically and factually, Homo sapiens is one of the five surviving species of great apes, along with chimpanzees, bonobos, gorillas, and orangutans

→ If we’re “above” nature, it’s only in the sense that a shaky-legged surfer is “above” the ocean. Even if we never slip (and we all do), our inner nature can pull us under at any moment.

→ Deep conflicts rage at the heart of modern sexuality. Our cultivated ignorance is devastating. The campaign to obscure the true nature of our species’ sexuality leaves half our marriages collapsing under an unstoppable tide of swirling sexual frustration, libido-killing boredom, impulsive betrayal, dysfunction, confusion, and shame.

→ Human beings evolved in intimate groups where almost everything was shared—food, shelter, protection, child care, even sexual pleasure. We don’t argue that humans are natural-born Marxist hippies. Nor do we hold that romantic love was unknown or unimportant in prehistoric communities. But we’ll demonstrate that contemporary culture misrepresents the link between love and sex. With and without love, a casual sexuality was the norm for our prehistoric ancestors.

→ [There are] two important assumptions underlying the standard narrative: that men are universally worried about paternity certainty (hence, his mate’s sexual fidelity is his main concern), while women are universally concerned with access to men’s resources (so a woman will feel more threatened by any emotional intimacy that might inspire him to leave her for another woman).

→ She will be sensitive to indications that he is considering leaving (vigilant toward signs of infidelity involving intimacy with other women that would threaten her access to his resources and protection)—while keeping an eye out (around ovulation, especially) for a quick fling with a man genetically superior to her husband.

→ He will be sensitive to signs of her sexual infidelities (which would reduce his all-important paternity certainty)—while taking advantage of short-term sexual opportunities with other women (as his sperm are easily produced and plentiful).

→ While we don’t dispute that these patterns play out in many parts of the modern world, we don’t see them as elements of human nature so much as adaptations to social conditions—many of which were introduced with the advent of agriculture no more than ten thousand years ago. These behaviors and predilections are not biologically programmed traits of our species; they are evidence of the human brain’s flexibility and the creative potential of community.

→ The shift to settled living in agricultural communities brought radical changes to women’s ability to survive. Suddenly, women lived in a world where they had to barter their reproductive capacity for access to the resources and protection they needed to survive.

→ Women’s seemingly consistent preference for men with access to wealth is not a result of innate evolutionary programming, as the standard model asserts, but simply a behavioral adaptation to a world in which men control a disproportionate share of the world’s resources.

→ It’s important to keep in mind that when viewed against the full scale of our species’ existence, ten thousand years is but a brief moment.

→ Anatomically modern humans are estimated to have existed as long as 200,000 years. With the earliest evidence of agriculture dating to about 8000 BCE, the amount of time our species has spent living in settled agricultural societies represents just 5 percent of our collective experience, at most.

→ Until agriculture, human beings evolved in societies organized around an insistence on sharing just about everything. But all this sharing doesn’t make anyone a noble savage.

→ Universal, culturally imposed sharing was simply the most effective way for our highly social species to minimize risk. Sharing and self-interest, as we shall see, are not mutually exclusive.

→ Human societies changed in radical ways once they started farming and raising domesticated animals. They organized themselves around hierarchical political structures, private property, densely populated settlements, a radical shift in the status of women, and other social configurations that together represent an enigmatic disaster for our species: human population growth mushroomed as quality of life plummeted. The shift to agriculture, wrote author Jared Diamond, is a “catastrophe from which we have never recovered.”

"Human beings will be happier—not when they cure cancer or get to Mars or eliminate racial prejudice or flush Lake Erie but when they find ways to inhabit primitive communities again. That’s my utopia.” - Kurt Vonnegut

→ Pre-agricultural (prehistoric) ancestors lived in groups where most mature individuals would have had several ongoing sexual relationships at any given time. Though often casual, these relationships were not random or meaningless. Quite the opposite: they reinforced crucial social ties holding these highly interdependent communities together.

→ Foragers divide and distribute meat equitably, breastfeed one another’s babies, have little or no privacy from one another, and depend upon each other for survival. As much as our social world revolves around notions of private property and individual responsibility, theirs spins in the opposite direction, toward group welfare, group identity, profound interrelation, and mutual dependence.

→ Once people were farming the same land season after season, private property quickly replaced communal ownership as the modus operandi in most societies. For nomadic foragers, personal property—anything needing to be carried—is kept to a minimum, for obvious reasons.

→ Clearly, the biggest loser (aside from slaves, perhaps) in the agricultural revolution was the human female, who went from occupying a central, respected role in foraging societies to becoming another possession for a man to earn and defend, along with his house, slaves, and livestock.

→ Because of private property, for the first time in the history of our species, paternity became a crucial concern. But the standard narrative insists that paternity certainty has always been of utmost importance to our species, that our very genes dictate we organize our sexual lives around it. Why, then, is the anthropological record so rich with examples of societies where biological paternity is of little or no importance? Where paternity is unimportant, men tend to be relatively unconcerned about women’s sexual fidelity.

→ We’re all members of one tribe or another—bonded by culture, family, religion, class, education, employment, team affiliation, or any number of other criteria. An essential first step in discerning the cultural from the human is what mythologist Joseph Campbell called detribalization. We have to recognize the various tribes we belong to and begin extricating ourselves from the unexamined assumptions each of them mistakes for the truth.

→ Genetically, the chimps and bonobos at the zoo are far closer to you and the other paying customers than they are to the gorillas, orangutans, monkeys, or anything else in a cage. Our DNA differs from that of chimps and bonobos by roughly 1.6 percent.

→ We are genetically equidistant from chimps and bonobos. And as Fisher notes, human sexual behavior has more in common with bonobos’ than with that of any other creature on Earth.

→ Bonobos engage in sex to ease tension, to stimulate sharing during meals, to reduce stress while traveling, and to reaffirm friendships during anxious reunions. “Make love, not war” is clearly a bonobo scheme.

→ No group-living nonhuman primate is monogamous, and adultery has been documented in every human culture studied—including those in which fornicators are routinely stoned to death. In light of all this bloody retribution, it’s hard to see how monogamy comes “naturally” to our species

→ If we accept that our species is and always has been optimized for a highly sexual life and that adolescent boys are especially primed for action, why should we be surprised by the explosions of destructive frustration that result from the thwarting of this primal drive?