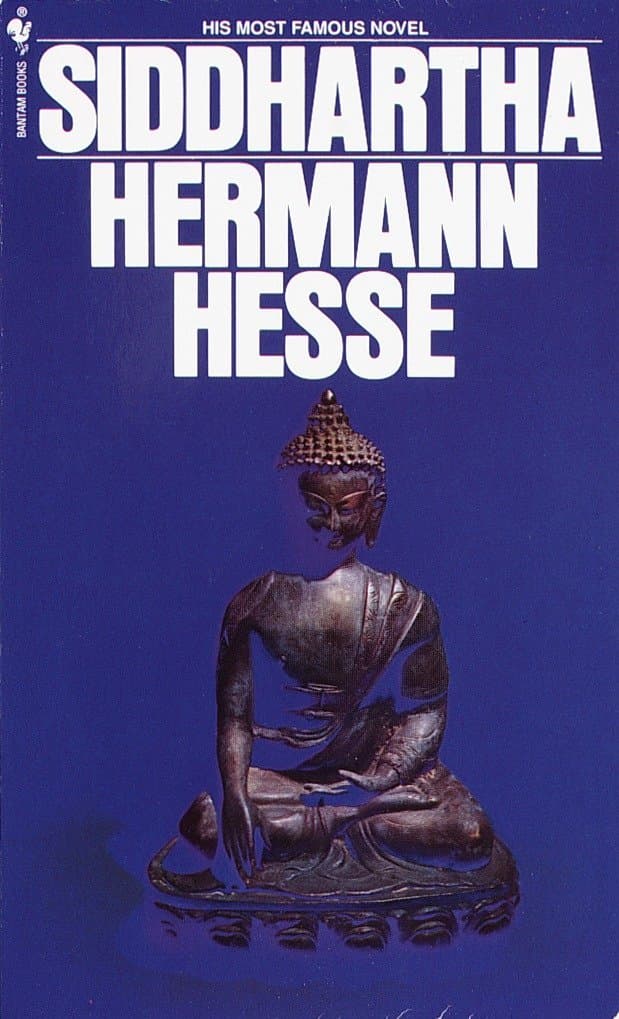 Siddharta is a man who seeks enlightenment but doesn’t believe in learning from the teachings of others 一 not even from those of the Buddha himself. He first tries to attain it by meditating, fasting, and owning little, then 一 disillusioned 一 by giving in to pleasure and material things.

Unsuccessful in his quest, he drowns himself in a river out of self-pity. At the last moment, the river reminds him of his deeper essence and saves his life. In the following days, by listening close to the river’s voice, he finally understands the true nature of things: always unfolding, transforming, and containing all elements at the same time. The moment he surrenders to it, is the moment he becomes enlightened.

→ [Siddhartha speaking to the Buddha] “You have found salvation from death. It has come to you in the course of your own search, on your own path, through thoughts, through meditation, through realizations, through enlightenment. It has not come to you by means of teachings! And一thus is my thought, oh exalted one,一nobody will obtain salvation by means of teachings! You will not be able to convey and say to anybody, oh venerable one, in words and through teachings what has happened to you in the hour of enlightenment! The teachings of the enlightened Buddha contain much, it teaches many to live righteously, to avoid evil. But there is one thing which these so clear, these so venerable teachings do not contain: they do not contain the mystery of what the exalted one has experienced for himself, he alone among hundreds of thousands. This is what I have thought and realized, when I have heard the teachings. This is why I am continuing my travels一not to seek other, better teachings, for I know there are none, but to depart from all teachings and all teachers and to reach my goal by myself or to die. But often, I'll think of this day, oh exalted one, and of this hour, when my eyes beheld a holy man.”

→ He pondered deeply, like diving into a deep water he let himself sink down to the ground of the sensation, down to the place where the causes lie, because to identify the causes, so it seemed to him, is the very essence of thinking, and by this alone sensations turn into realizations and are not lost, but become entities and start to emit like rays of light what is inside of them.

→ "Look, Kamala: When you throw a rock into the water, it will speed on the fastest course to the bottom of the water. This is how it is when Siddhartha has a goal, a resolution. Siddhartha does nothing, he waits, he thinks, he fasts, but he passes through the things of the world like a rock through water, without doing anything, without stirring; he is drawn, he lets himself fall. His goal attracts him, because he doesn't let anything enter his soul which might oppose the goal. This is what Siddhartha has learned among the Samanas. This is what fools call magic and of which they think it would be affected by means of the daemons. Nothing is affected by daemons, there are no daemons. Everyone can perform magic, everyone can reach his goals, if he is able to think, if he is able to wait, if he is able to fast."

→ It seemed to him, as if the river had something special to tell him, something he did not know yet, which was still awaiting him. In this river, Siddhartha had intended to drown himself, in it the old, tired, desperate Siddhartha had drowned today. But the new Siddhartha felt a deep love for this rushing water, and decided for himself, not to leave it very soon.

→ Love this water! Stay near it! Learn from it! Oh yes, he wanted to learn from it, he wanted to listen to it. He who would understand this water and its secrets, so it seemed to him, would also understand many other things, many secrets, all secrets. But out of all secrets of the river, he today only saw one, this one touched his soul. He saw: this water ran and ran, incessantly it ran, and was nevertheless always there, was always at all times the same and yet new in every moment!

→ In this hour, Siddhartha stopped fighting his fate, stopped suffering. On his face flourished the cheerfulness of a knowledge, which is no longer opposed by any will, which knows perfection, which is in agreement with the flow of events, with the current of life, full of sympathy for the pain of others, full of sympathy for the pleasure of others, devoted to the flow, belonging to the oneness.

→ "When someone is searching," said Siddhartha, "then it might easily happen that the only thing his eyes still see is that what he searches for, that he is unable to find anything, to let anything enter his mind, because he always thinks of nothing but the object of his search, because he has a goal, because he is obsessed by the goal. Searching means: having a goal. But finding means: being free, being open, having no goal. You, oh venerable one, are perhaps indeed a searcher, because, striving for your goal, there are many things you don't see, which are directly in front of your eyes."

→ The world, my friend Govinda, is not imperfect, or on a slow path towards perfection: no, it is perfect in every moment, all sin already carries the divine forgiveness in itself, all small children already have the old person in themselves, all infants already have death, all dying people the eternal life.

→ And this is now a teaching you will laugh about: love, oh Govinda, seems to me to be the most important thing of all. To thoroughly understand the world, to explain it, to despise it, may be the thing great thinkers do. But I'm only interested in being able to love the world, not to despise it, not to hate it and me, to be able to look upon it and me and all beings with love and admiration and great respect.