The Sovereign Individual by James Davidson and William Rees-Mogg 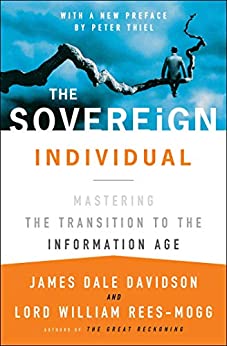 After hunting-gathering, farming, and industrial societies we are entering a fourth stage of humanity, the Information Age. Unlike previous revolutions, which took either thousands of years or centuries, this will happen within our lifetime.

In the Information Age, the concept of nation will lose meaning as people will increasingly coordinate in cyberspace. Those who can educate themselves will be almost entirely free to invent their own work and realize the full benefits of their own productivity. Anyone with a phone, regardless of country, religion or social class, will be able to participate in the cybereconomy.

The brightest, most successful and ambitious of these will emerge as truly Sovereign Individuals.

Through all of human history from its earliest beginnings until now, there have been only three basic stages of economic life: 1) hunting-and-gathering societies, 2) agricultural societies, 3) industrial societies. Now, looming over the horizon, is something entirely new, the fourth stage of social organization: information societies.

The Information Revolution will happen within a lifetime. What is more, it will happen almost everywhere at once. Technical and economic innovations will no longer be confined to small portions of the globe.

Emerging economies will no longer need to rely as much as during the Industrial Age upon local factors of production. Their enhanced ability to draw upon capital and expertise at a distance will lead to higher rates of growth.

Those who can educate themselves will be almost entirely free to invent their own work and realize the full benefits of their own productivity. In an environment where the greatest source of wealth will be the ideas you have in your head rather than physical capital alone, anyone who thinks clearly will potentially be rich.

The brightest, most successful and ambitious of these will emerge as truly Sovereign Individuals. This will leave individuals far more responsible for themselves than they have been accustomed to being during the industrial period.

Innovations that alter the logic of violence in unprecedented ways are transforming the boundaries within which the future must lie.

[Violence didn’t pay off for hunter-gatherers.] Mobile populations generally do not store foodstuffs against seasonal or unexpected lows in resource availability. Consequently, foragers had little to steal. The logic of the hunt also dictated that violence among hunting-and-foraging bands could never rise above a small scale because the groups themselves had to remain tiny. The small scale of foraging bands was advantageous in another way. Members of such small groups would have known one another intimately, a factor that made them more effective in working together.

The advent of agriculture entailed more than a change in diet; it also launched a great revolution in the organization of economic life and culture as well as a transformation of the logic of violence. Farming created large-scale capital assets in land and sometimes in irrigation systems. The crops and domesticated animals farmers raised were valuable assets. They could be stored, hoarded, and stolen. Because crops had to be tended over the entire growing season, from planting through harvest, migration away from threats became less attractive.

As escape became more difficult, opportunities for organized shakedowns and plunder increased. Farmers were subject to raids at harvest time, which gradually raised the scale of warfare. This tended to increase the size of societies because contests of violence more often than not were won by the larger group.

Farming gave rise to specialization in violence. Precisely because it created something to steal, farming made investment in better weaponry profitable. The result was theft, much of it highly organized. The powerful were now able to organize a new form of predation: a monopoly of violence, or government.

[In the Information Age] The balance between extortion and protection will tip dramatically in the direction of protection. An entirely new realm of economic activity that is not hostage to physical violence will emerge in cyberspace. It will not be possible for a government to monopolize cyberspace, a realm with no physical existence at all.

When technology is mobile, and transactions occur in cyberspace, as they increasingly will do, governments will no longer be able to charge more for their services than they are worth to the people who pay for them. Cyberspace is the ultimate offshore jurisdiction. Taxing capacity will plunge by 50~70 percent. This will tend to make smaller jurisdictions more successful.

Another logical implication of falling returns to violence is the eclipse of politics. The liberation of a large part of the global economy from political control will oblige all remaining forms of government to operate on more nearly market terms. They will ultimately have little choice but to treat populations in territories they serve more like customers, and less in the way that organized criminals treat the victims of a shakedown racket.

Governments controlled by their customers, like those of proprietors, have incentives to reduce their operating costs as far as possible. Where customers rule, governments are lean and generally unobtrusive, with low operating costs, minimal employment, and low taxes.

A crucial part of this change will come about because of the effect of information technology in liberating the holders of wealth from expropriation through inflation. Soon, you will pay for almost any transaction over the Net or World Wide Web at the same time you place it, using cybercash. This new digital form of money is destined to play a pivotal role in cybercommerce.

It will consist of encrypted sequences of multihundred-digit prime numbers. Unique, anonymous, and verifiable, this money will accommodate the largest transactions. It will also be divisible into the tiniest fraction of value. It will be tradable at a keystroke in a multitrillion-dollar wholesale market without borders.

We don’t expect to see dictatorship, but rather entrepreneurial government - the commercialization of sovereignty. Unlike dictatorship, or even democracy, commercialized sovereignty will not foreclose choice. It will afford every individual greater scope for expressing his views. And for those with the talent to take advantage of it, commercialized sovereignty will permit more practical scope for decision-making and self-determination than any form of social organization that has heretofore existed.

This new redistributive theory holds that the management, shareholders, employees, and "community" are all "stakeholders" of firms. Sooner or later, by default if not by design, services and products provided by large bureaucratic agencies and corporations will devolve into highly competitive markets, managed not from a 'headquarters" but through a distributed, decentralized network.