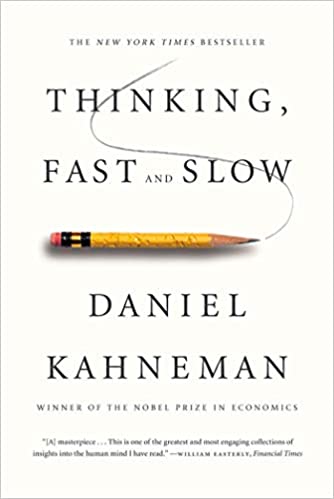 Our thinking can be approximately separated in two different Systems: System 1 and System 2.

System 1 operates automatically and quickly, with little or no effort and no sense of voluntary control. System 1 excels at constructing the best possible story that incorporates ideas already activated. The measure of its success is the coherence of the story it manages to create. The amount and quality of the data on which the story is based are largely irrelevant.

‍When information is scarce, which is a common occurrence, System 1 operates as a machine for jumping to conclusions. Poor evidence can still make a very good story. For some of our most important beliefs we have no evidence at all, except that people we love and trust hold these beliefs. Considering how little we know, the confidence we have in our beliefs is preposterous—and it is also essential.

System 2 allocates attention to the effortful mental activities that demand it, including complex computations. It is associated with more analytical and rational thinking, doubting, and the subjective experience of agency, choice, and concentration.

‍Activities that impose high demands on System 2 require self-control, and the exertion of self-control is depleting and unpleasant: effortful mental activity appears to be especially expensive in the currency of glucose.

In general, our mind constantly simplifies things in order to deal with the otherwise overwhelming complexity. It is wired to consume as little energy as possible, producing feelings of pleasure when we experience cognitive ease. However, this predisposition to see the world as more simple and predictable than it really is reduces the anxiety that we would experience if we allowed ourselves to fully acknowledge the uncertainties of existence.

⇾ System 1 operates automatically and quickly, with little or no effort and no sense of voluntary control. System 2 allocates attention to the effortful mental activities that demand it, including complex computations. The operations of System 2 are often associated with the subjective experience of agency, choice, and concentration.

⇾ Everyone has some awareness of the limited capacity of attention, and our social behavior makes allowances for these limitations. When the driver of a car is overtaking a truck on a narrow road, for example, adult passengers quite sensibly stop talking. They know that distracting the driver is not a good idea, and they also suspect that he is temporarily deaf and will not hear what they say.

⇾ The gorilla study illustrates two important facts about our minds: we can be blind to the obvious, and we are also blind to our blindness.

⇾ A general “law of least effort” applies to cognitive as well as physical exertion. The law asserts that if there are several ways of achieving the same goal, people will eventually gravitate to the least demanding course of action. In the economy of action, effort is a cost, and the acquisition of skill is driven by the balance of benefits and costs. Laziness is built deep into our nature.

⇾ Baumeister’s group has repeatedly found that an effort of will or self-control is tiring; if you have had to force yourself to do something, you are less willing or less able to exert self-control when the next challenge comes around. The phenomenon has been named ego depletion.

⇾ The nervous system consumes more glucose than most other parts of the body, and effortful mental activity appears to be especially expensive in the currency of glucose. When you are actively involved in difficult cognitive reasoning or engaged in a task that requires self-control, your blood glucose level drops.

⇾ In the 1980s, psychologists discovered that exposure to a word causes immediate and measurable changes in the ease with which many related words can be evoked. If you have recently seen or heard the word EAT, you are temporarily more likely to complete the word fragment SO_P as SOUP than as SOAP. The opposite would happen, of course, if you had just seen WASH. We call this a priming effect and say that the idea of EAT primes the idea of SOUP, and that WASH primes SOAP.

⇾ The familiarity of one phrase in the statement sufficed to make the whole statement feel familiar, and therefore true. If you cannot remember the source of a statement, and have no way to relate it to other things you know, you have no option but to go with the sense of cognitive ease.

⇾ In addition to making your message simple, try to make it memorable. Put your ideas in verse if you can; they will be more likely to be taken as truth.

⇾ System 1 does not keep track of alternatives that it rejects, or even of the fact that there were alternatives. Conscious doubt is not in the repertoire of System 1; it requires maintaining incompatible interpretations in mind at the same time, which demands mental effort. Uncertainty and doubt are the domain of System 2.

⇾ Eliminating redundancy from your sources of information is always a good idea.

⇾ System 1 excels at constructing the best possible story that incorporates ideas currently activated, but it does not (cannot) allow for information it does not have. The measure of success for System 1 is the coherence of the story it manages to create. The amount and quality of the data on which the story is based are largely irrelevant. When information is scarce, which is a common occurrence, System 1 operates as a machine for jumping to conclusions.

⇾ We are pattern seekers, believers in a coherent world, in which regularities appear not by accident but as a result of mechanical causality or of someone’s intention. We do not expect to see regularity produced by a random process, and when we detect what appears to be a rule, we quickly reject the idea that the process is truly random.

⇾ Our mind is strongly biased toward causal explanations and does not deal well with “mere statistics”.

⇾ The sense-making machinery of System 1 makes us see the world as more tidy, simple, predictable, and coherent than it really is. The illusion that one has understood the past feeds the further illusion that one can predict and control the future. These illusions are comforting. They reduce the anxiety that we would experience if we allowed ourselves to fully acknowledge the uncertainties of existence.

⇾ Confidence is a feeling, which reflects the coherence of the information and the cognitive ease of processing it. It is wise to take admissions of uncertainty seriously, but declarations of high confidence mainly tell you that an individual has constructed a coherent story in his mind, not necessarily that the story is true.

⇾ People are twice as much averse to losses than attracted by gains.

⇾ Memories are all we get to keep from our experience of living, and the only perspective that we can adopt as we think about our lives is therefore that of the remembering self.

⇾ What we learn from the past is to maximize the qualities of our future memories, not necessarily of our future experience. This is the tyranny of the remembering self.