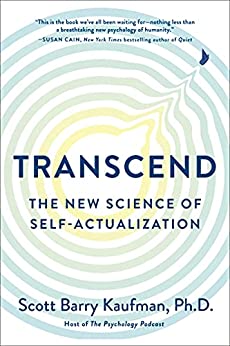 For each individual, the need for self-actualization is just as important as other needs, such as connection and security. Although there is a hierarchy to human needs, they do not sit one on top of the other like in a pyramid. Rather, they coexist at all times as part of the same structure, like a boat.

Although the need for self-actualization might seem selfish at first, the realization and expression of one’s whole personality is paradoxically a fundamental step to transcend the self and best serve others. If society can create the conditions to meet people's basic needs, including the need for growth and personal development, what spontaneously emerges are the qualities that resemble the best in humanity.

Healthy transcendence is an emergent phenomenon resulting from the harmonious integration of one’s whole self in the service of cultivating a good society.

Be someone before being no one

If society can create the conditions to satisfy one’s basic needs, what naturally and organically emerges tends to be the characteristics that resemble the best in humanity.

The sailboat of needs

The pyramid from the sixties told a story that Maslow never meant to tell; a story of achievement, of mastering level by level until you’ve “won” the game of life. But that is most definitely not the spirit of self-actualization that the humanistic psychologists emphasized. The human condition isn’t a competition; it’s an experience. Life isn’t a trek up a summit but a journey to travel through—a vast blue ocean, full of new opportunities for meaning and discovery but also danger and uncertainty. In this choppy surf, a clunky pyramid is of little use. Instead, what is needed is something a bit more functional. We’ll need a sailboat.

As we sail through the adventure of life, it’s rarely clear sailing. The boat itself protects us from seas that are rarely as calm as we’d like. Each plank of the boat offers security from the waves. Without it, we’d surely spend all our energy trying to stay above water. While even one plank is better than nothing, the bigger the boat, the more waves you can endure. Likewise in life, while safety is an essential foundation for feeling secure, adding on strong connections with others and feelings of respect and worthiness will further allow you to weather the storms. Having a secure boat is not enough for real movement, however. You also need a sail. Without a sail, you might be protected from water, but you wouldn’t go anywhere. Each level of the sail allows you to capture more wind, helping you explore and adapt to your environment. Note that you don’t “climb” a sailboat like you’d climb a mountain or a pyramid. Instead, you open your sail, just like you’d drop your defenses once you felt secure enough. This is an ongoing dynamic: you can be open and spontaneous one minute but can feel threatened enough to prepare for the storm by closing yourself to the world the next minute. The more you continually open yourself to the world, however, the further your boat will go and the more you can benefit from the people and opportunities around you.

The good life is not something you will ever achieve. It’s a way of living. As Carl Rogers noted, “The good life is a process, not a state of being. It is a direction, not a destination.” This process won’t always bring feelings of happiness, contentment, and bliss, and it may even sometimes cause pain and heartache. It’s not for the “faint-hearted,” as Rogers notes, as it requires continually stretching outside your comfort zone as you realize more and more of your potentialities and launch yourself “fully into the stream of life.”

‍Just like it takes courage to open your sail on a sailboat and see where the winds will take you, it takes a lot of courage to become the best version of yourself. Nevertheless, if you stick with it, you are sure to live a richer life, one that is better characterized by adjectives such as “enriching,” “exciting,” “rewarding,” “challenging,” “creative,” “meaningful,” “intense,” and “awe-inspiring.”

Healthy transcendence is an emergent phenomenon resulting from the harmonious integration of one’s whole self in the service of cultivating the good society.

Healthy transcendence is not about being outside of the whole, or feeling superior to the whole, but being a harmonious part of the whole of human existence. It’s also not a level any human ever actually achieves, but it is a north star for all of humanity. In a nutshell: healthy transcendence involves harnessing all that you are in the service of realizing the best version of yourself so you can help raise the bar for the whole of humanity. There are those among us who are consistently motivated by these higher values and higher experiences. For these “transcenders,” self-actualization is merely a bridge to transcendent states of being. These transcenders show us what is possible in all of us and what we could become as a species.

While we should not strive for perfection, each of us is capable of transcendence in this brief, suffering, and yet sometimes miraculous lifetime. We each have the potential to be a guide to future generations, to help them fill out the rest of the pages in their own style.